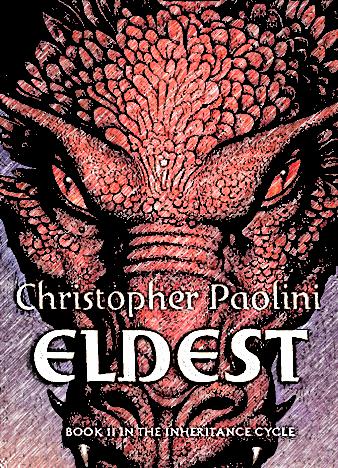 Eragon and his dragon, Saphira, have just saved the rebel state from destruction by the mighty forces of King Galbatorix, cruel ruler of the Empire. Now Eragon must travel to Ellesmera, land of the elves, for further training in the skills of the Dragon Rider: magic and swordsmanship. Soon he is on the journey of a lifetime, his eyes open to awe-inspring new places and people, his days filled with fresh adventure. But chaos and betrayal plague him at every turn, and nothing is what it seems. Before long, Eragon doesn’t know whom he can trust.

Meanwhile, his cousin Roran must fight a new battle–one that might put Eragon in even graver danger.

Will the king’s dark hand strangle all resistance? Eragon may not escape with even his life. . .

Christopher Paolini was born on November 17, 1983 in Southern California. He has lived most of his life in Paradise Valley, Montana with his parents and younger sister, Angela. As a child, he often wrote short stories and poems, made frequent trips to the library, and read widely. The idea of Eragon began as the daydreams of a teen.

Christopher's love for the magic of stories led him to craft a novel that he would enjoy reading. The project began as a hobby, a personal challenge; he never intended it to be published. All the characters in Eragon are from Christopher's imagination except Angela the herbalist, who is loosely based on his sister. Christopher was fifteen when he wrote the first draft of Eragon.

He took a second year to revise the book and then gave it to his parents to read. The family decided to self-publish the book and spent a third year preparing the manuscript for publication: copyediting, proofreading, designing a cover, typesetting the manuscript, and creating marketing materials. During this time Christopher drew the map for Eragon, as well as the dragon eye for the book cover (that now appears inside the Knopf hardcover edition).

The dog Enzo is absolutely sure that he will be a man in the next life. The wise...

In this stunning follow-up to the global phenomenon The Da Vinci Code, Dan...

Danielle Steel is back, ladies and gentlemen, and she brought a brand-new bestse...