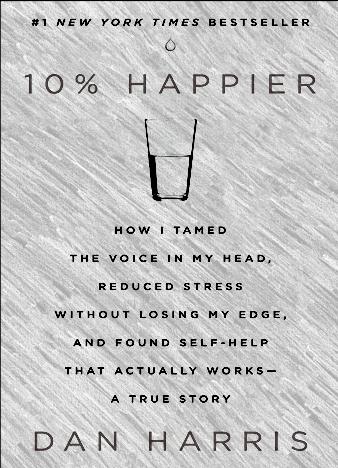 This is a really great book for anyone who is skeptical about meditation, or who is turned off by the new-age or spiritual language that often accompanies it. Dan studies Insight meditation, which is rooted in Theraveda Buddhism and is a form of Vipassana, but many people who practice it consider themselves secular, and practice it apart from a Buddhist-based belief system. Dan covers a lot of the medical research into the benefits of meditation, as well as organizations that are teaching it, such as the Marines, Target Corporation, and General Mills.

Dan is very funny, and provides a lot of entertaining stories about challenges in his career, and his experiences on a 10-day silent meditation retreat. He also offers basic mindfulness meditation instructions, and an FAQ for beginning (and skeptical) meditators. My only complaint is that at times he is a bit judgmental of spiritual teachers such as Eckhart Tolle and Deepak Chopra. But on the other hand, this may resonate with his target audience. I know some people feel the book is very egotistical, but to me it came across as more of a newscaster/comedian voice. He opens up quite a bit about himself, including admitting to drug use early in his career, and various unsavory thoughts, so that humanized him in my eyes, and made me willing to put up with the occasionally arrogant or judgmental tone. He comes across as sincere in his desire to introduce people to meditation, and I can't really see any benefit to him in doing that, so I take his word for it that he just wants to share something that has been good for him.

The title comes from his attempts to explain his reasons for meditating to friends and colleagues. He finds that replying that meditation makes him '10% Happier' intrigues people, because it sounds real and attainable, but also makes it worth it. So overall, this book is a great memoir and introduction to meditation for anyone still on the fence about it, or skeptical.

A gifted FBI profiler was confident that he was dealing with just another case o...

Believe it or not, the fruits and veggies have secret healing powers that we nev...

Patricia Cornwell's series of Scarpetta novels is considered by many experts to...