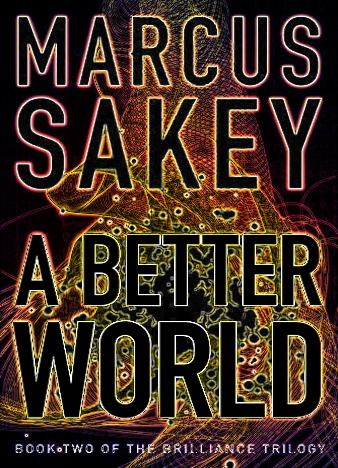 A BETTER WORLD (THE BRILLIANCE TRILOGY BOOK 2) by MARCUS SAKEY

It's safe to say that the exceptional brilliants have successfully changed the world. Since the 80s, 1% of the population has been born with special abilities that humanity had been dreaming of for ages. And for the last 3 decades, the world's been fighting with an ever-growing dissension between these gifted individuals and the rest of the human race.

And now, a mighty terrorist group controlled by some evil brilliants has successfully brought 3 major cities to their knees. The stores and markets are empty; the cops are nowhere to be found; the radicals are burning folks alive just for the heck of it. On the other side of the confrontation, Nick, a loyal, good-hearted brilliant, is a man of honor and dedication. All he wants is to make planet Earth a better place for his kids.

He's an advisor to the President himself and is standing against everything that the rogue brilliants represent. However, the United States are headed towards a destructive civil war, and Nick ends up right in the middle of a sick game that he simply can't lose. The delusional fanatics have an alarming vision of a new world order, and only Cooper can stop them.

Once again, the national hero is about to confront the biggest threat humanity has ever dealt with, and it's up to him to bring people together and to fight for what is right. Marcus Sakey did a wonderful job with A Better World, the second chapter in the best-selling and game-changing Brilliance series. This is an exciting page-turner with just the right "proportions" of thrill, mystery, drama, supernatural, politics and romance. If you're a fan of all-around amazing books that keep you on the edge of your seat, make sure to check this book out!