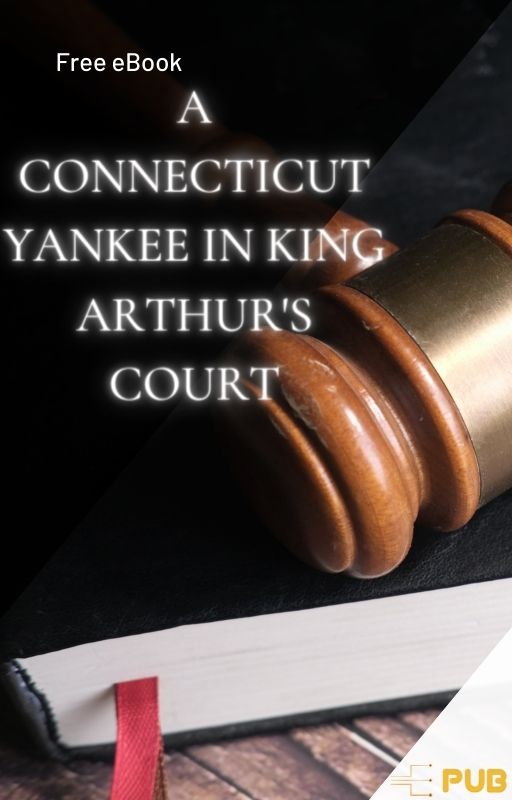 A Connecticut Yankee in King Arthur's Court by Mark Twain

The story begins as a first-person narrative in Warwick Castle, where a man details his recollection of a tale told to him by an "interested stranger" who is personified as a knight through his simple language and familiarity with ancient armor. After a brief tale of Sir Lancelot of Camelot and his role in slaying two giants from the third-person narrative, taken directly from Le Morte d'Arthur, the man named Hank Morgan enters and, after being given whiskey by the narrator, he is persuaded to reveal more of his story. Described through first-person narrative as a man familiar with the firearms and machinery trade, Hank is a man who had reached the level of superintendent because of his proficiency in firearms manufacturing, with 2000 subordinates. He describes the beginning of his tale by illustrating details of a disagreement with his subordinates during which he sustained a head injury from a "crusher" to the head caused by a man named "Hercules" using a crowbar. After passing out from the blow, Hank describes waking up underneath an oak tree in a rural area of Camelot, where he soon encounters the knight Sir Kay, riding by. Kay challenges him to a joust, which is quickly lost by the unweaponed, unarmored Hank as he scuttles up a tree. Kay captures Hank and leads him towards Camelot Castle. Upon recognizing that he has time-traveled to the 6th century, Hank realizes that he is the de facto smartest person on Earth, and with his knowledge he should soon be running things. Hank is ridiculed at King Arthur's court for his strange appearance and dress and is sentenced by them, particularly the magician Merlin, to burn at the stake on 21 June. By a stroke of luck, the date of the burning coincides with a historical solar eclipse in 528 of which Hank had learned in his earlier life (however, NASA and other listings of solar eclipses show there in fact was no solar eclipse on that date). In prison, he sends the boy whom he christens Clarence (whose real name is Amyas le Poulet) to inform the king that he will blot out the sun if he is executed. Hank believes the current date to be 20 June; however, it is actually the 21st when he makes his threat, the day that the eclipse will occur at 12:03 p.m. When the King decides to burn him, the eclipse catches Hank by surprise. However, he quickly uses it to his advantage and convinces the people that he caused the eclipse. He makes a bargain with the king, is released, and becomes the second most powerful person in the kingdom. (Twain may have drawn inspiration for that part of the story from a historical incident in which Christopher Columbus exploited foreknowledge of a lunar eclipse.) Hank is given the position of principal minister to the king and is treated by all with the utmost fear and awe. His celebrity brings him to be known by a new title, elected by the people, "The Boss". However, he proclaims that his only income will be taken as a percentage of any increase in the kingdom's gross national product, which he succeeds in creating for the state as Arthur's chief minister, which King Arthur sees as fair. Although the people fear him and he has his new title, Hank is still seen as somewhat of an equal. The people might grovel to him if he were a knight or some form of nobility, but Hank faces problems from time to time since he refuses to seek to join such ranks.

Unlock your inner explorer in this riveting account of one of history’s gr...

The Innocents Abroad first saw the light of day back in 1869. It's a travel book...

At the point when Chesterton was preparing to head out to America for a talking...