A PERFECT UNION OF CONTRARY THINGS 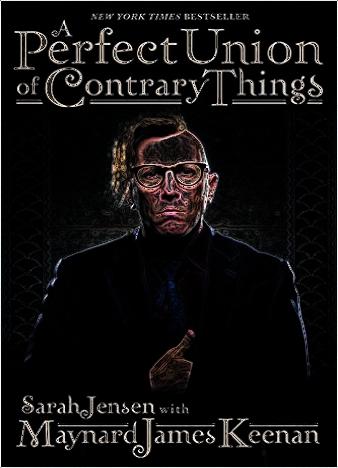 Keenan, the leader of a legendary metal band, Tool, has been doing all kinds of great things for the musical industry, and, he's been involved in other amazing projects as well. And Sarah Jensen is probably the best person out there who could write the greatest biographical book about him, because they've been friends for more than 30 years. She knows things about his ups and down, his rise and fall, stuff that nobody else has ever known.

Keenan spent his early years in Midwest, then served in the Army, then went to an art school, and now he's a world-acclaimed musician, someone who has influenced more musicians and bands than even he could ever count. So, in all fairness, This book is a brilliant portrait of a multi-talented, gifted and passionate artist and talks about the places, the inspirations and those very special moments that made Keenan who he is today.

It's safe to say that the fans will deeply appreciate this book, as they never really had a chance to learn about their icon's journey through life, his thoughts, dreams, hopes and nightmares. This man has always been one to take 3 steps instead of two, and, even though he had countless obstacles on his way towards greatness, he always managed to beat all the odds and reach his goals.

The book comes with words of his own, Sarah's superb narrative and some comments from his family, band members, colleagues and celebrities. Plus, the readers will find adorable pictures of Keenan from childhood all the way up to 2016. A Perfect Union of Contrary Things is a wonderful book that will be an awesome read for all those folks who love real, honest, revealing stories about iconic people and their rise to success.

Inspiring autobiographical books are a rare thing these days, but it's safe to s...

In this lyrical, unsentimental, and compelling memoir, the son of a black Africa...