BENEATH A SCARLET SKY: A NOVEL 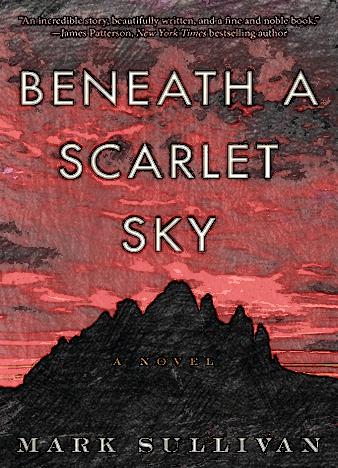 BENEATH A SCARLET SKY: A NOVEL by MARK SULLIVAN

Mark Sullivan's new epic tale is heavily based on real events and the true story of an unsung hero, a fine young gentleman and his unbelievable bravery and resilience during World War 2. Pino never wanted to fight the Germans or anybody else. He was just a regular teenage kid from Italy. The only things that he was interested in were girls, music, and delicious food.

However, soon, his whole world was flipped upside down. When the Allied forces bombed his city and destroyed his home, he decided it was time for him to man up and to help the local Jews escape the atrocities of the Nazis over the Alps. That's when he met Anna and fell in love with her - she was 6 years older than him and lost her husband recently.

The boy's mom and dad were worried think about their son and forced him to join the Germans in order to protect himself. They thought that by doing so, he'd stay out of trouble and would never have to kill another human being. Yet, when he catches a bullet, they recruit him as the personal driver for a brutal Nazi General, one of the most powerful and influential leaders of the Third Reich.That gives Pino a once-in-a-lifetime opportunity to spy on the German Elite and to share everything he learns about their plans with the Allies. Thus, he stays loyal to the Nazis but secretly supplies the resistance with vital info and keeps dreaming of defeating the enemy and getting back to Anna. Beneath a Scarlet Sky is a poignant, moving and engrossing story of love, hate, faith, and history. Mark Sullivan wrote an incredible saga, a stirring, compelling tale about a hero and a great man.

Shane Dawson, a best-selling author, is back with yet another uplifting, feel-go...