CROOKED KINGDOM: A SEQUEL TO SIX OF CROWS 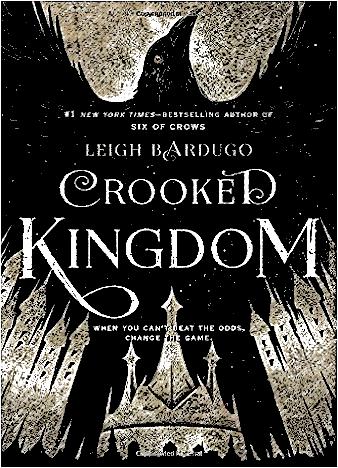 CROOKED KINGDOM: A SEQUEL TO SIX OF CROWS by LEIGH BARDUGO

Leigh Bardugo created a lot of international buzz with her ground-breaking Six of Crows novel, and now she's back with the official sequel. Please welcome Crooked Kingdom, yet another thrilling, action-packed and gripping book by the award-winning author. So, as the fans of the first novel in the series know, Kaz and his crazy-insane crew did actually manage to do a successful heist.

It was such a daring mission that only daredevils like this team would be able to pull it off. Hey, even Kaz himself wasn't sure that they'll all survive it. However, despite the fact that they were promised a fat check that would allow them to enjoy a life of luxury somewhere on a private island, they are forced to - once again - fight for their own survival. The team was double-crossed, and now they're weak, low on everything and don't really have a solid, working plan.

There's a highly dangerous drug that all the mighty powers in the world are after, and so, all the old enemies are back in Ketterdam and on Kaz's tail. The only thing that will keep the crew together and give them a real fighting chance is their loyalty to each other, but will they be able to stand strong for each other and trust the teammates? A devastating war is coming, and it will lay waste to the city.

The fate of the whole world is in the mercenary's hands, and the battle for redemption will finally set the record straight. The critics are calling Crooked Kingdom the perfect sequel, and the fans are praising the author for that killer mix of non-stop action, rich characters, a strong narrative with mighty twists and a unique, brisk, engaging story.

A major new novel from one of science fiction's most powerful voices, AURORA tel...