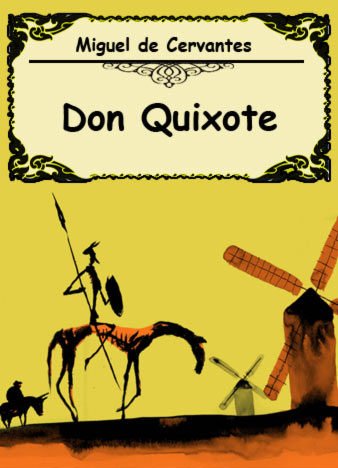 With magnificent ingenuity, Cervantes tells us the story about the adventures of an impoverished nobleman, who lives in a dream world of honourable knights, and his faithful armour bearer Sancho Panza. Like Goethe's Faust for the Germans the Don Quixote has become for the Spaniards a symbol of a national genius. The sympathy of the narrator to his characters and his lovingly ironic tone make Don Quixote one of the most wonderful and memorable antiheroes of world literature.

Inspired by the noble chivalric ideals and by his love of incomparable and equally fictitious Dulcinea main character of this story goes on the greatest adventure under the self-chosen name Don Quixote together with his horse Rocinante and his simple-minded neighbour Sancho Panza.

Don Quixote fights against windmills, wineskins, or flocks of sheep that appear to him as evil dragons, giants or armies. Because of that ,he even received a nicknamed - the "Knight of the Sorrowful Countenance". Poor Sancho was in great despair because of the doings of his old master.

But not the madness sends Don Quixote on this epic journey between reality and delusion, but the great and bright ideas. Because of that, this story so easily enriches the readers mind and touches their hearts. Don Quixote novel is a timeless masterpiece that full with beautiful scenes, delicious humour and an extraordinary protagonist, the incomparable and unsurpassable Don Quixote of La Mancha.

If you love science fiction and TV, then you most definitely know and love the E...

On the little planet Lucifram, returning bright and loneliness Cruising am...