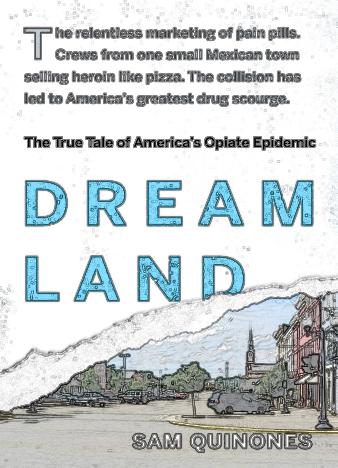 Back in 1929, almost 100 years ago, a company built a swimming pool in Portsmouth. The pool was really huge - as big as a football field, and they called it Dreamland. Later on, it turned into the pride and joy of the community. However, what used to be a dream town was destroyed by addiction, just like many other small towns and suburbs all over the United States. This country had to deal with addiction from the very early days, but this was the most devastating one yet.

So, how did another wave of drug abuse on a national level "attack" America? Dreamland is Sam Quinones's answer to that question. He's got the necessary skills and experience behind his back to tell the story of yet another collision course this country took. He's a world-esteemed reporter and writes a documentary book as if it was a novel, grabbing the reader's attention from the very first page and never letting go.

Pain medications reached their highest peak back in the '90s, and that's when Purdue Pharma started promoting their "magical" painkiller - OxyContin. It was ridiculously expensive and addictive, and people were buying it on every corner. At the same time, a huge inflow of black tar heroin devastated small and mid-size cities and towns, and there was little the authorities could do about that.

The cartels had nothing to do with it - the heroin was coming from a tiny county somewhere in Mexico, and it was cheap and easy to get. The distribution system was almost undetectable, and that's exactly how the nation got hooked on drugs. In Dreamland, Sam Quinones did a brilliant job of introducing us to several key figures who were involved in this case, including Mexican pushers, pharma personnel, investigators, and survivors. This is a documentary on a disease that could hit again at any moment and lay waste to yet another generation.

In Russia's battle with Napoleon, Tolstoy saw a catastrophe that included all ma...

Unlock your inner explorer in this riveting account of one of history’s gr...