EMPIRE OF STORMS (THRONE OF GLASS) 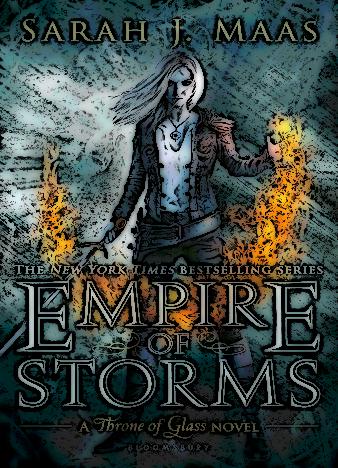 EMPIRE OF STORMS (THRONE OF GLASS) by SARAH. J. MAAS

Empire of Storms is the 5th book in the bestselling Throne of Glass series by none other than Sarah J. Maas, one of the most popular writers in the genre. Aelin's life-long journey towards victory has just begun. She lost a lot of friends but gained new ones; some people broke her trust, others joined her cause; and finally, those with magic can't seem to find common grounds with those without it.

Aelin has a duty - to protect her own people and to be loyal to the prince who's standing with her and fighting the good fight. The girl will have to dig deep into herself and use her powers to the fullest in order to save the people that she truly cares about. However, the dark forces are awake, and they'll do everything in their power to conquer her world and lay waste to it.

Terrifying creatures are coming back for a new epic battle, and the only way to beat this unstoppable enemy is to embark on an impossible quest that might also mean the end of the world as she knows it. Aelin and her friends can't win this battle without a huge sacrifice, so, the only thing left to do is to choose whom or what they are ready to let go of in order to save Erilea and the innocents in it.

The brand-new addition to the series is yet another masterpiece from Sarah J. Maas - another bestseller and crowd pleaser. It's fast-paced, thrilling and brilliantly written. The critics are already calling it the best book in the series and the fans are begging for more. You won't be able to put Empire of Storms down and the heart-wrenching, intriguing, epic story will leave you speechless. Oh, and there's a shocking twist waiting for you at the end, too!

From the New York Times bestselling author of Voices from Beyond&...