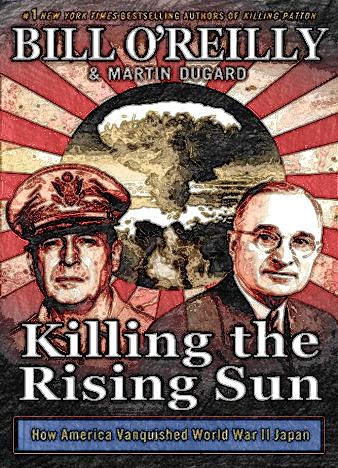 Bill O’Reilly is a world-acclaimed author who's got more than a few bestselling books behind his back. His Killing series is an international hit, and Killing the Rising Sun is the latest offering from the master. It's powerful, honest, riveting and exciting - perfect for the fans of the genre. It's 1944, and WW2 is almost over in Europe.

However, it's escalating in the Pacific, where the US troops are fighting with a fierce enemy who will stop at nothing to be victorious. The Japanese soldiers follow the centuries-old code that claims surrendering is not the answer for a real samurai and that it's a form of dishonor. So, welcome to the tropical jungles and battlefields - General MacArthur is back in the seat and is ready to deliver the final, killing blow to the mighty opponent.

At the same time, Oppenheimer and his group of genius scientists are working day and night, getting ready to the first-ever test of the greatest weapon that humanity has ever created. After Roosevelt passes away, Truman becomes the next president of the United States, and he's burdened with one of the hardest and most important decisions in the world: whether to use a nuclear weapon on Japan or not.

But the Japanese Emperor who is like a demigod to his people, refuses to surrender, despite the fact that his soldiers are dying every single day, and the number of body bags is getting bigger and bigger. Killing the Rising Sun is yet another thrilling book from Mr. Bill O’Reilly, and it's safe to say that if you've been a fan of any of his previous bestsellers, you'll definitely love this one. WW2 is about to end, but there are still a lot of crucial decisions to be made.

A masterful and comprehensive new chronicle of World War II, by internationally...

They're calling C. G. Cooper one of the greatest new voices in the political act...

Welcome to 1969: three promising young men were thrown right into the middle of...