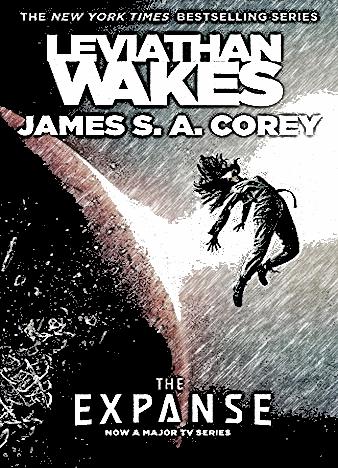 LEVIATHAN WAKES (THE EXPANSE BOOK 1) by JAMES S. A. COREY

As far as modern-day science fiction series go, The Expanse definitely makes it into the top-3. James S. A. Corey created a best-selling, internationally acclaimed and award-winning franchise that made a brilliant debut on TV. Leviathan Wakes is the very first novel in the series, and the show on Syfy is heavily based on it.

Humanity has finally colonized the solar system, but it didn't bring the regular folks any dividends. Sure, the brave men and women are roaming the never-ending universe, but poverty, starvation, and wars never seem to stop. It's been 2 hundred years since mankind found a permanent home in open space, but everything's falling apart, and the colonies are not very happy with Earth making them work harder than they should.

And when the captain of a ship and a frustrated cop get involved in the case of a missing young lady, they don't really think that they're launching a chain of events that could potentially change everything for the human kind. But that's exactly what happens, and civil war is about to devastate the entire human race. At the same time, an even greater secret, a huge conspiracy is exposed - the biggest one in history. And so, the heroes will have to dig deeper and try to stay alive in order to figure out what's really going on what we, the human beings, will have to deal with in the nearest future.

A greater evil is coming, and if Earth fails to make peace with the Belters, all hope will be lost. Leviathan Wakes is a gripping, thrilling and action-packed space opera that you'll fall in love with the moment you start reading it. It's equally entertaining and thought-provoking, and that's partially why the series is so popular these days.

This book is probably an implementation of bad dreams of many modern people. In...

Jeff Wheeler is a prominent figure in modern-day fantasy literature and his King...