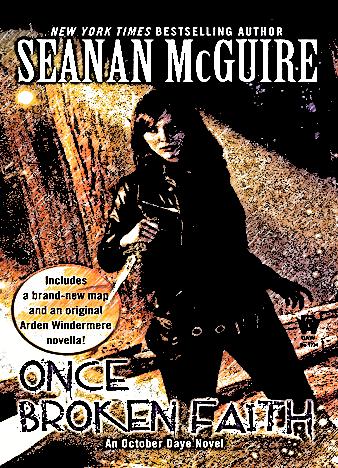 ONCE BROKEN FAITH: AN OCTOBER DAYE NOVEL by SEANAN MCGUIRE

The October Daye series is an international bestseller and has a very strong, loyal fanbase, and every time a new novel comes around, it creates a worldwide buzz. Seanan McGuire created a wonderful universe with amazing characters, a plot full of twists, and a fast-paced, action-charged narrative. Toby Daye, the main character of the book, has never been one for politics. She only went to the Kingdom of Silences to convince it not to wage war on her own Kingdom and to live in peace.

However, she returned home with a bunch of problems that need her immediate attention. Without even noticing it, she set in motion a chain of events that potentially could shift the balance of the whole world. And that's exactly why they ordered her to appear before the King and the Queen. She is a major target and a mysterious killer has been killing innocents without a real motive.

Toby herself is being named as the prime suspect, so, she needs to find the assassin before he (she?) can hit again and clear her own name. She's running out of time, as her friends and the people that she cherishes are in danger now. Her only chance at preventing a cataclysmic event that could potentially put the whole West Coast in chaos is to track down the killer(s) and bring them to justice. If she fails, the balance will forever be broken, and she will never be able to safe those that were lost during the attacks.

Once Broken Faith is a brilliant fantasy story that will most definitely be appreciated by the true fans. Seanan McGuire provides a deadly combination of adventure, mystery, fantasy, and, of course, romance. The book is truly awesome and will mesmerize you with a strong plot, great characters and a whole bunch of twists that McGuire's urban fantasy series is known for.

Of all the decisions a new parent makes, choosing that special name is the most...