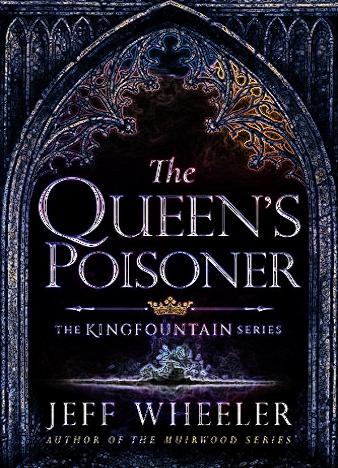 THE QUEEN'S POISONER (THE KINGFOUNTAIN SERIES BOOK 1) by JEFF WHEELER

The Queen's Poisoner is the very first novel in the bestselling Kingfountain series that is greatly appreciated by the modern-day young adult readers. Jeff Wheeler's unique, diversified trilogy is worth the highest praise. King Severn is a brutal man, and they respect him out of fear. He grabbed the throne with force, killed countless rightful kings and murdered every single person who dared to oppose him.

A lot of heirs and dukes tried to overthrow him, but they all lost. For example, Duke of Kiskaddon has no other choice but to "hand over" his teenage son as a hostage for Severn. Furthermore, he gets an official warning: the boy's throat will be slit if his father tries to go against him for the second time. The boy, Owen, is strong-willed and passionate, and he manages to find new allies in the kingdom and to strengthen his position.

However, just when he starts to adjust to this new reality, he learns that his father was accused of betrayal again, and that means only one thing for Owen - death. So, all that's left for him to do is to prove he's worth to the king more alive than dead. But, that won't be easy to do. There's only one person who can help him in this desperate attempt to save his own life: a mysterious lady who has control over enormous forces and is ready to aid the boy in his quest.

Will Owen be able to clear his name and live to see another day? The Queen's Poisoner is a brilliant fantasy novel for the young adults. It's got enough action, drama, and suspense to win over even the most experienced readers. Jeff Wheeler's award-winning series is considered to be one of the best ones in contemporary literature, so, make sure to put it on your list of must-haves!

In Tokyo, sixteen-year-old Nao has decided there’s only one escape from he...

McGraw-Hill is revolutionizing the Music Appreciation course by introducing its...