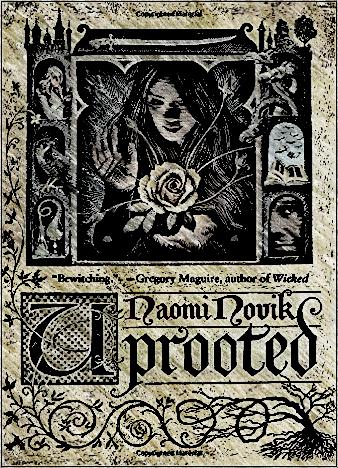 The fans of science fiction and fantasy know and love Naomi Novik for the best-selling and ground-breaking Temeraire series, and now she's back with a brand-new novel, a brand-new universe that invites the readers into a fascinating world of folk legends and myths. The critics call Uprooted one of the best books in the genre, and the fans are putting it on the highest pedestal ever. So, what's so great about this novel? It's awesome! Yes, it's just that simple!

Agnieszka, the main character of the new fantasy novel, is in love with her world - the valley, her nice, cozy village, the rivers - all of it. However, the terrifying Wood is at the border, full of evil powers, and it casts a devastating shadow over the village and everybody in it. The people from the settlement fully rely on the mysterious wizard, who's known as the Dragon, to protect them.

He's the only one who can keep the enemy from corrupting and killing everybody, but he is not doing the job for free: he demands one young girl to live in his "chamber" and serve him for a full decade. They say life with the wizard is horrifying, almost as much as the Wood itself. Another circle is coming to an end, and the wizard will soon come after a new woman to serve him. Agnieszka is terrified, but not because she'll be chosen by the Dragon.

No, everybody in the village knows that Kasia will be taken. She's brave, full of grace and gorgeous - Agnieszka is not. The girls are the best friends in the world - have been for a long time - and she can't find a way to help her, to save Kasia from the wizard's hands. But, as it soon turns out, Agnieszka got it all wrong, and the wizard is not coming for Kasia. So, who is destined to serve the Dragon for the next 10 years?

Historical fantasy has always been one of the most popular genres in the United...

The world of Arkaria is a dangerous place, filled with dragons, titans, goblins...