YOU CAN'T TOUCH MY HAIR 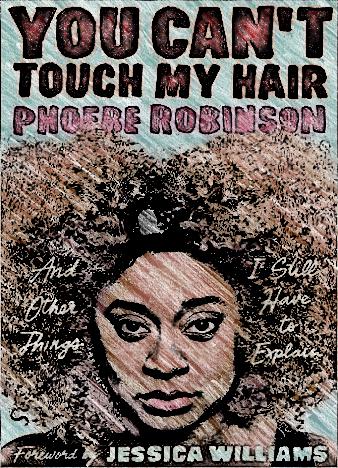 YOU CAN'T TOUCH MY HAIR by PHOEBE ROBINSON

They call Phoebe Robinson the new voice of the new generation, the writer that speaks for all the young African-American ladies who have to deal with racism, feminism and everything in between on a daily basis. This bright, inspiring girl talks about pretty much everything in the world, from the simplest and most trivial things to complicated matters like racial inequality and social degradation.

She's got a fascinating writing style that's both funny and engaging. You'll most definitely have tons of fun reading this book, but you'll also learn a lot of important stuff that will stay with you for a very long time. You Can't Touch My Hair is a bold, brisk, refreshing collection of tales and stories about gender, race and everything that's currently "trending". And Phoebe Robinson is not just a regular gifted young lady who speaks her mind - she's so much more than that.

Behind those funny jokes and regular subjects, you'll find an author who's not afraid to speak up and to stand for what she believes in. Being a black woman in the United States has its perks, but it also has its downsides. You have to battle centuries-old prejudices and hold your own every single day. Phoebe has definitely experienced her mighty share of awkward and offensive moments over the last couple of years.

They judged her for having her own opinion, being black and even listening to U2, because, apparently, only white folks are allowed to listen to that band. Expect all of that nonsense and more to be ruthlessly satirized by Phoebe on the pages of her brand-new book. This is a personal story that examines the modern-day cultural shifts and comments on discrimination, hate, injustice and crime in a funny, optimistic manner.