DO ANDROIDS DREAM OF ELECTRIC SHEEP? 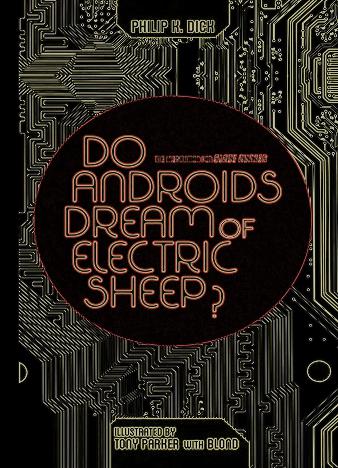 DO ANDROIDS DREAM OF ELECTRIC SHEEP? by PHILIP K. DICK

Philip K. Dick is a world-acclaimed writer who revolutionized the science fiction and fantasy genre and was a true visionary. Do Androids Dream of Electric Sheep is a true masterpiece and a very dark, bold, realistic depiction of a future world that looks a lot like ours. By the way, Blade Runner, an all-time big-screen classic, is heavily based on Dick's novel. By 2021, a terrifying war had taken the lives of millions and endangered a number of species.

This forced humanity to leave planet Earth. And for those who decided to stay, the corporations created incredibly realistic "copies" of dogs, cats, horses - pretty much every species from the animal kingdom. They built humans, too. Their "androids" were so advanced and complex that nobody could tell them apart from real men and women. The robots looked and acted exactly like humans.

The government, troubled by the devastation that these things could bring into the world, decided to ban them from planet Earth. So now the hunted, unauthorized robots have to be constantly on the run and hide from the force, otherwise, they'll be terminated. They live among humans and do everything in their power to blend in and to stay undetected.

Rick, the main character of the book, is a world-class hunter, and he's got a job to do: find these rebellious androids and put an end to them. However, mankind had no idea that the robots are smart, strong, and have a few tricks up their own sleeves. They can fight back and know how to hit back - hard. Do Androids Dream of Electric Sheep is an iconic novel, and the author is a legend who will be forever remembered by the fans as the "godfather" of science fiction.

"I was born twice: first, as a baby girl, on a remarkably smogless Detroit day o...

The Land is the sixth installment in the game-changing and ground-breaking Chaos...

The Kept Woman is an exceptional new mystery thriller that you won't be able to...