THE MAGIC STRINGS OF FRANKIE PRESTO: A NOVEL 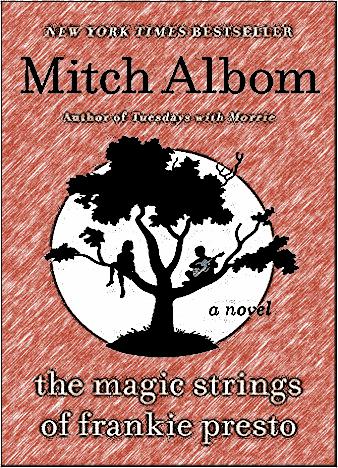 THE MAGIC STRINGS OF FRANKIE PRESTO: A NOVEL by MITCH ALBOM

Mitch Albom is back with a brand-new inspirational bestseller that will linger on longer after you finish the book. This is the story of Frankie, an orphan of war, a child born in a church and "adopted" by a blind man, a guitar teacher. The kid had amazing skills and talent in music, and his abilities defined not only his future in America but also the lives of everybody around him.

Back when Frankie was a regular 9-year-old boy, he met Aurora, the girl he wanted to marry, the woman of his life, his one-and-only soul-mate. However, he didn't get a chance to spend any time with her, because civil war devastates his neighborhood that same day and they sent him to the US. Sitting in the very bottom of a boat, he had only 6 strings and his trusty guitar - all he needed to change everything he touched.

Music was his best friend and his only hope for survival. His talent took him through the exciting universe of the music of the 20th century, including the early jazz scene in Detroit, up to Mr. Elvis Presley himself. Now, even though Frankie was amazed by this brave new world and the endless possibilities it provided, he never stopped searching for the girl he fell in love with - Aurora.

Years later, Frankie became a star in music, and he got everything he wanted - fame, new friends, and, of course, Aurora, who became his wife. But, his musical gift became a burden and it made him push Aurora away. So, he decided to disappear into thin air, only to come back stronger and better. The Magic Strings of Frankie Presto is a one-of-a-kind novel that will be greatly appreciated by the fans of "classic" stories that make you both laugh and cry.

The fans have been waiting for a while for Mrs. Hoover, a bestselling author, to...

The main work of Dante Alighieri is not just a fantastic invention, but an entir...