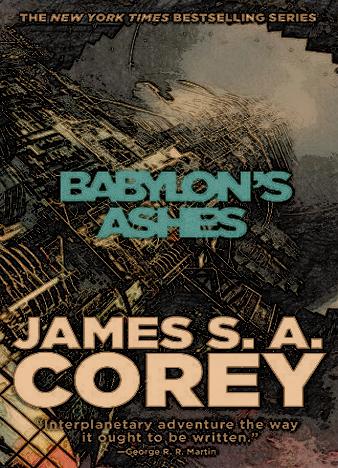 BABYLON'S ASHES (THE EXPANSE) by JAMES S. A. COREY

If you love science fiction and TV, then you most definitely know and love the Expanse series on Syfy. It's gripping, thrilling and captivating, just like the book it was based on. That's right, James S. A. Corey created one of the best franchises in the genre, and, even though the TV show is pretty great, nothing compares to the original.

Babylon's Ashes is the sixth installment in the best-selling series, and the revolution that has been "cooking up" for ages has finally begun. Blood will be shed, and people will die in this violent war. A brutal team of Belters has put planet Earth on its knees and is constantly terrorizing the outer planets, grabbing everything of value and leaving the folks with nothing. The colony ships are also under heavy fire, and the military ships are simply not strong enough to defense the cargo and to defeat the attackers.

Holden and his trusty group knew every single detail about this new threat's strong and weak sides, and that makes them an asset in this war. The old political elite are outgunned and broken, and the only way for them to survive is to get to the Medina Station. However, the new alliances are not strong at all, and the battle for power is only beginning.

Chaos is growing, the different fractions don't know where to turn to, and, on top of it all, there's an alien menace somewhere in deep space. And while the universe is consumed with revolutions, mutinies and betraying each other, humanity is on the brink of extinction...Babylon's Ashes is a must-have for all the fans of riveting, exciting and thought-provoking science fiction stories. If you loved the show, you'll also love the books.

Empire of Storms is the 5th book in the bestselling Throne of Glass series by no...

The Maresh Empire is in great danger: darkness is consuming everything on its wa...