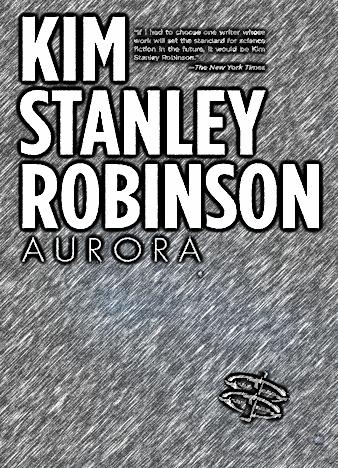 A major new novel from one of science fiction's most powerful voices, AURORA tells the incredible story of our first voyage beyond the solar system.

Brilliantly imagined and beautifully told, it is the work of a writer at the height of his powers.

Generations ago, a starship left Earth with plans to set up a colony in the Tau Ceti system. Aurora begins in the final stage of the journey, with the ship only a few years out. Early on we’re introduced to a young teen, Freya, daughter of the ship’s chief engineer, Devi. The novel moves quickly through the years as Freya grows older, documenting the problems the ship faces as landfall nears: a host of mechanical/environmental issues (power plant problems, crop failures, etc.), biological obstacles (especially island devolution), and social problems. With landfall, new issues arise as the ship’s population lands a small number of early settlers who begin building the colony and preparing it to receive the rest of the ship. Eventually, the colonists come face to face with the basic question of viability—is this mission even possible? This problem — the social division it causes and its eventual compromise solution — drive the second half of the book.

Much of the novel’s narrative point-of-view focuses on Freya, but more interestingly, the narrator, or perhaps more accurately, the “author” of the story is the Ship, tasked early on by Devi to “tell the story” of the mission. Ship is a relatively rudimentary AI at the start of the novel, but one who grows in consciousness and responsibility throughout the novel’s course. Thus Aurora is a coming-of-age story both for Freya and, more compellingly, for Ship, in addition to being a generation ship story.

This choice by Robinson to have Ship “author” the text is at times delightful and at times frustrating. Ship’s early difficulties in composing a narrative allows for Robinson to play in the meta-fiction field for the first quarter or so of the book, as Ship tries to nail down basic storytelling concepts and techniques...

The book's protagonist is a Victorian English scientist and gentleman inventor l...

Ruby, a 17-year-old girl, possesses the powers of a Fireblood, but she's been hi...

Couldn't have enough of the recent smash hit, Rogue One? Looking for some new in...