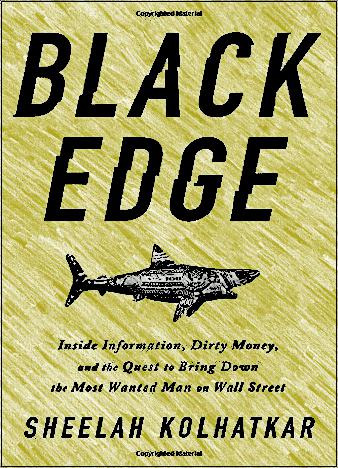 Cohen's name is well-known in the billionaire slashtrader circles, and his once-mighty SAC Capital, the"indestructible" hedge fund, used to be huge backin the day. But it came crashing down later, and Black Edge follows the biggest insider trading investigation ever. If you love best-sellers like TheBig Short and such, then you'll definitely appreciate Sheelah Kolhatkar's wit, smarts and amazing journalistic grip.

The previous 2 decades marked a huge shift on thepolitical/economic landscape of the United States and the rest of the world. The birth of a group of ridiculously-rich financiers had a great impact on the planet's future. These enormous resources allowed a tiny bunch of folks to write new rules that suit them best and to exploit 'em to the fullest.

So, how did it come to this? Why couldn't we predictand/or prevent this? Read Black Edge and you'll findout! Kolhatkar's meticulous research shows exactly how Mr. Cohen turned into one of the wealthie stand dirtiest men in modern-day finance. However, when the JD (Justice Department) finally caught up to him, there was not much he or anybody else could do. This fella and his "buddies" never builtany thing in their lives or invented new tech.

No, they made their fortune on speculation and insane bets that made them rich. Yes, they could justas easily fail, but they were lucky, in a way. And now they're not only stupid rich, but also have a huge influence over society. Today, hedge funds are operating with +/- 3 trillion (!) in assets, and the rushfor money makes the traders do unthinkable things just to get to the top of their game. Black Edge isa gold-mine for all those folks that want to learn how Wall Street works and who the key players are.

Buffett is back . . . and better than before! A decade has passed since the b...