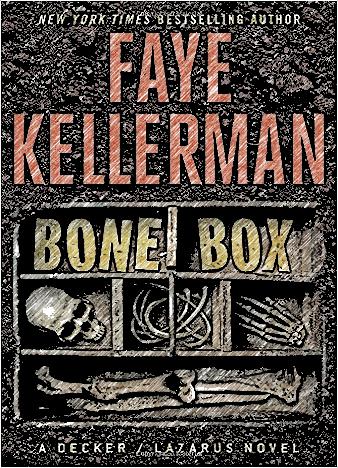 Faye Kellerman is doing a marvelous job with the Decker/Lazarus series and always manages to get the fans excited for the next book in the line-up. Bone Box is the latest addition to the franchise, and it's just as good as any of the previous ones, if not better. If you're a fan of mystery thrillers and police procedurals, then you'll have a great time with this novel.

Rina was just enjoying the fresh air and the sunlight on a regular September morning when she came across remains of a body that was buried somewhere deep in the forest grounds. She gave a call to her husband - Pete - who used to work for the LAPD as a detective lieutenant. Currently, he's with the local cops, but he's still got the skills. Next, the police turned the beautiful forest into a crime scene and the officers started to work on it 24/7/.

The big problem is - the body has been lying there for years, and there isn't enough physical evidence to link it to anything. It used to be a youngster, has a huge skull wound and quite long locks of hair. Decker joins the case and starts investigating the crime with Tyler, his trusty partner. The fellas think that the body most likely belongs to the missing student from the college where Rina works.

Soon, the cops find even more dead bodies (or, rather, human remains) in the vicinity and it becomes obvious that this isn't just one of those cases of a single murder. No, this time around, they're dealing with something gruesome, a psychopath of a serial killer. Decker doesn't have enough men at his disposal, so, he asks Rina to keep an eye on the campus folks. The killer is not done yet, and it's up to this courageous people to stop him from claiming yet another innocent soul...

James Rollins is back with a brand-new book from the bestselling Sigma Force ser...

A US Coast Guard vessel comes across a sub right at the bottom of the Arctic Oce...