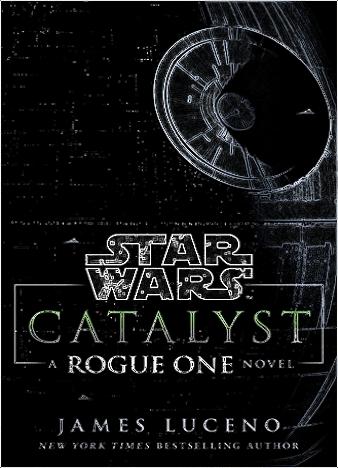 CATALYST (STAR WARS): A ROGUE ONE NOVEL by JAMES LUCENO

Longing for an action-packed, thrilling and invigorating science-fiction novel? James Luceno is just the right man for the job! He's officially back with Catalyst, ladies and gentlemen, a brand-new bestseller in the legendary Star Wars universe. This is a breath-taking story about loyalty, betrayal, ambitions and higher morals. Centuries-old wars are breaking the galaxy in half.

The Rebels and the great Republic have been at each other's throats for eternity, and every side is working 24/7 to develop even more advanced tech to put an end to the endless clash. Orson, a valued member of the top-clearance project known as Death Star, has dedicated himself to creating a new era super weapon that will wipe out the "competition". And, as it turns out, Mr. Erso, a genius-level scientist, and his old friend, might just be the answer to building this machine of death.

His extensive research has caught the eye of both Orson and his enemies, which makes the poor scientist a vital "element" in winning the galactic war. But, when Orson saves the doc and his entire family from the brutality of the Separatists, Erso is more than happy to work on the guy's project. They make him the leader of the Death Star initiative and provide him with all the resources he could ever need.

And, while he believes that his discoveries will be used to solve...altruistic problems, Orson has other uses for them. So, will the doc be able to save himself, his family and the universe along the way, or is his life work doomed to bring death to all living things? Catalyst is a brilliant science fiction novel that combines action with adventure for an awesome read.

THE GREATEST FANTASY EPIC OF OUR TIME The dark, fearsome Ringwraiths are search...

The Maresh Empire is in great danger: darkness is consuming everything on its wa...