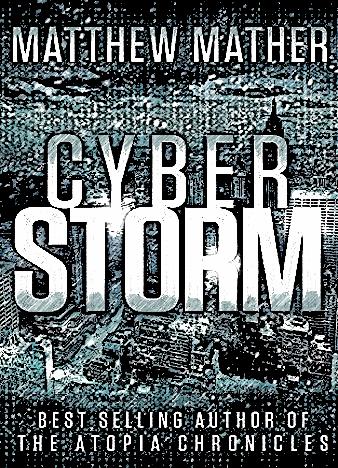 CyberStorm is a gripping thriller slash science fiction novel that's considered to be one of the best ones in the genre. Matthew Mather, the author, did a wonderful job of showing in excruciating details what a dead-on cyber attack against the modern-day city of New York will feel like for one regular family that's trying to survive in this new reality.

Mike, the main character of the book, is just a normal working resident of the great city who's trying to keep his loved ones together. But, when disaster and terror strikes, all he can do is hope that he can save them, to keep them alive and fight against all odds. When the communication networks, including phones and the Internet, go down, a lethal viral epidemic consumes NY. Next, a gigantic snowstorm cuts the New Yorkers from the rest of the United States, leaving the people in the city one on one with the horrors of the attack.

Chaos and destruction rule the streets now, and folks keep talking about a foreign invasion, but all everybody can think about is protecting their loved ones and finding a way to escape the doomed city. It's safe to say that CyberStorm is a 100% blockbuster, a game-changing novel that will glue you to your seat and make you a part of the story, another survivor of the attack.

Matthew Mather received unbelievably positive reviews from the most respected critics and successful writers, and that means you're in for a real treat. Hands down, CyberStorm is a must-have if you're a fan of the science fiction/thriller genre and appreciate a story that's as hot as a frying pan and keeps turning the "heat" until it explodes into a fascinating finale.

As the bestsellers "Life of Pi" the new book by Yann Martel is a masterpiece ful...