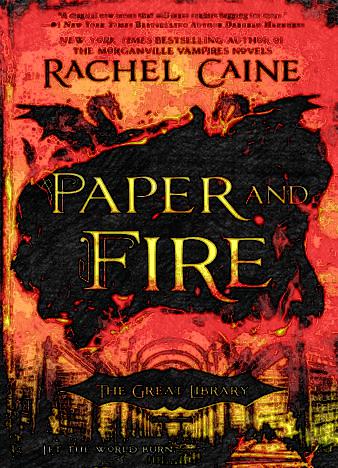 PAPER AND FIRE by RACHEL CAINE

This book is probably an implementation of bad dreams of many modern people. In the world, which author created, the knowledge is power. Why? Well, in real world the knowledge is power too, but in “Paper and Fire” people have not right to keep the books! The only one who can do this is a really powerful organization, which is called The Great Library.

The main character of book is Jess Brightwell. This man is familiar to readers of the previous book of this wonderful series. He survived despite daring to sneak into the library as a spy and trying to become the part of this organization. But his life… His life is changed forever! Furthermore, the lives of his closest people are changed too.

The Great Library has enough power for punish people, who dare to break the prohibition of keeping books. Of cause, this organization has enough power to fight its enemies… Jess loses his best friend. The girl that Jess loves, Morgan, become prisoner of the Iron Tower. Her future are dark, if something will not be changed…

Jess and his friends tried to do something, but they made a wrong move, and The Great Library declares a hunt. All good guys are forced to escape into London's street. The home of Brightwell isn’t safe already. Welsh army attack London, the city in flame. Soon, very soon, Jess will be needed to make a choice between family, friends and wishes of The Great Library…

The second book of the series, which is written by Caine, is magnificent as previous. If you like some stories in anti-utopia genre, including many other great books on this theme, well, you’ll probably like this one, because the conception here is truly exciting, and plot is well enough too. This book can impress even those people, who does not like such theme previously.

He lives in solitude beneath the city, an exile from society, which will destroy...