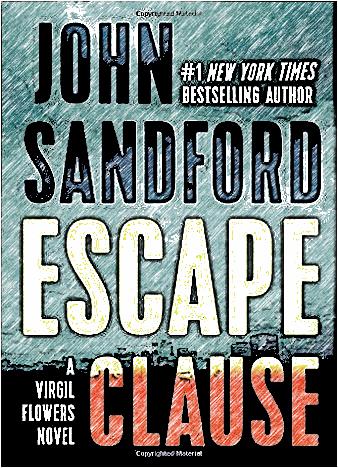 Looking for that one-of-a-kind mystery thriller to bring some excitement into your regular days and night? Mr. John Sandford got you covered! Escape Clause is a stand-out new bestseller from one of the greatest writers of our time and comes with unexpected twist, turns, a gripping plot and non-stop action. The story begins with 2 big and quite rare Amur tigers disappearing from their cage in an American zoo.

Now, the officials are extremely worried, because they think that somebody stole the animals for their body parts. They say that Chinese medicine has great use for the organs of an Amur tiger, and folks around the world are ready to pay a lot to get what they want. And some of the criminals are ready to go even further and do more harm than the usual scumbags, and Virgil is about to get himself into a messy and dangerous investigation.

At the same time, he also has to deal with whatever's going on at his own home. He's having a great time with his girlfriend, and their relationship is slowly, but steadily becoming more than just a fling. However, when her sister decides to move in with them and stay for the summer, Virgil's perfectly-planned life gets something of a course correction.

First things first, she's doing a lot of research on migrant workers, and that means she's automatically making herself the #1 enemy to some very brutal and ruthless people. Oh, and that's not all. Sparkle, Virgil's girlfriend's sister, finds him quite...attractive. Escape Clause is a top-notch mystery thriller that's got enough action, drama and fun to keep you up all night. John Sandford is an awesome writer, and he proved it once again in 2016 with his latest bestseller.

When it comes to mystery, thrillers, and suspense, Mr. Stuart Woods is one of th...

Detective Bosch is back, ladies and gentlemen, and he's got a job to complete: h...