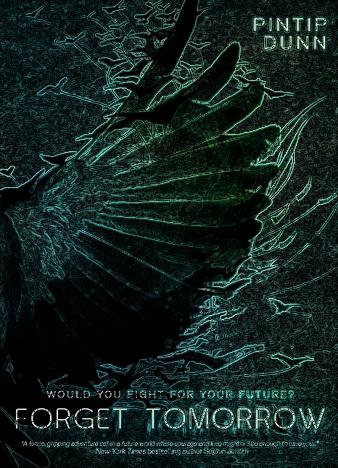 Forget Tomorrow is a fascinating new novel in the genre of science fiction and fantasy that would be a perfect gift for a young adult. Pintip Dunn delivers a mighty smash of mystery, thriller, and drama, captivating and grabbing your attention from the very first chapter. Forget Tomorrow is a story about a world where our destinies are already chosen by our future selves.

Callie, the main character of the novel, is celebrating her 17th birthday, and, just like any other kid her age, she can't wait to get her vision - a memory from the future that will define her role in this life. Every person gets his/her own, unique vision, and people become world-class lawyers, scientists, detectives...while Callie becomes a criminal. The vision shows her killing her own gifted sister, and before she can understand what that truly means, the police arrest her and put her in jail.

Now, the only one who can save her is Logan, a boy she used to love back when she was a little girl. However, they've been apart for 5 years. He helps her escape, but Callie doesn't really know the first thing about what he's been doing this whole time. Can she put her trust in him? True, he does look a lot like the boy she used to know - but he's a handsome young man now. He's got his own demons to fight, his own dark secrets.

Callie, once again, falls in love with him and soon she discovers that they were never meant to be together. So, she's running away from the government and her own destiny, trying to figure out how to make sense of it all. She will have to do the impossible - find a way to be with Logan and protect her young sister from a deadly enemy - herself...

Clive Cussler, a bestselling author, is back on his A-game with Pirate, yet anot...

It is 1939. Young socialite woman is decided to outrage her relatives by some un...