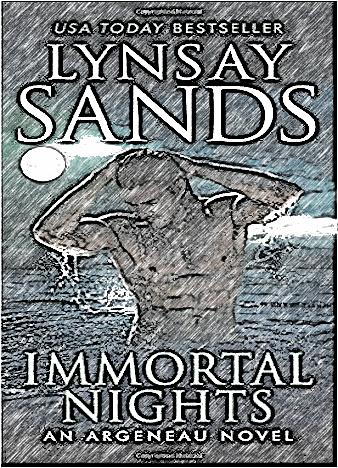 The Argeneau Novel series has a very special place in the hearts and minds of the fans of romantic stories, and now Lynsay Sands is back with Immortal Nights - a brand-new installment that's raising the bar higher than ever. Abigail, the heroine of the book, has been going through some tough times lately. She lost a lot along the way, but, at the same time, she found true love in the face of an immortal man.

He's big, brutal, with tons of muscles and a smile to die for. He's locked up in the cargo hall of a plane, and nobody can set him free except for her. She's trying to resist the urge, but the instincts take over and she frees the mysterious stranger. Together they will have to learn how to survive and stay in the shadows. Abigail can't breathe normally when she's standing next to him - every time they touch, it's like he takes her to a different universe.

The man's name is Tomasso, and he knows that this girl is his destiny, the love of his life. And he's really scared that one day he might lose her forever. But, he's trying not to show her his weakness. The people who kidnapped him are after them, and so, the man and the girl are hiding somewhere in the middle of nowhere, trying to figure out the next move.

Obviously, Abigail doesn't have a clue that Tomasso has special "abilities", but one hot, intense night, he decides to open up to her about everything. Immortal Nights is wild, sexy, passionate and intriguing. Lynsay Sands keeps delivering top-notch novels with the series, and it's safe to say that the ladies will enjoy every bit of Immortal Nights, the latest addition to the franchise.

Turgenev based many of these short stories on his own observations while hunting...

THE ELVEN
THE ELVEN by Bernhard Hennen

The international bestseller and epic adventure.  A fierce and merciless d...

The Mitch Rapp series has been breaking all kinds of international records since...