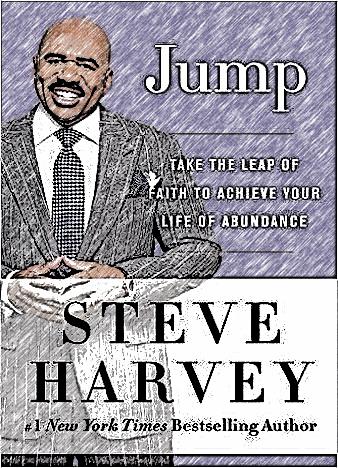 Who's Steve Harvey? If you're a modern-day American who watches TV and reads books at least once a year, then you definitely know who this legendary man is. He's a #1 best-selling author who has more awards and international acclaim than any other black man today. In Jump, he reveals all his secrets and tip"tricks on how to be successful and teaches how to get that good life.
Do you know how to achieve a full, blessed, happy life that you can be proud of? Well, he most certainly does! Back in January 13, 2016, Mr. Harvey started speaking from the bottom of his heart after Family Feud was done. He had no idea that the cameras were still on and kept sharing deeply intimate insights into his own experiences and success story. His assistants were quite moved by his powerful speech and put the 6-minute-long clip on YouTube.
The video became an Internet sensation and now has about 60 million views! In a way, Jump is like a more elaborate version of that short video, but, at the same time, it's an uplifting, inspirational and illuminating manual. Steve's message, or, rather, his motto is simple: Jump, ladies and gentlemen, like never before. Jump like your very life depends on it.
The truth is - it really does, and if you want a wonderful life in peace, quiet, and prosperity, you're gonna have to give it everything you've got. The iconic host used to be a homeless man, lived in his old car, dropped out of college, had to deal with the consequences of a 2nd failed marriage, risked everything just to try his luck on national TV and even owed IRS 20 million bucks. Still, he managed to stand strong on both feet and keep on rockin'!