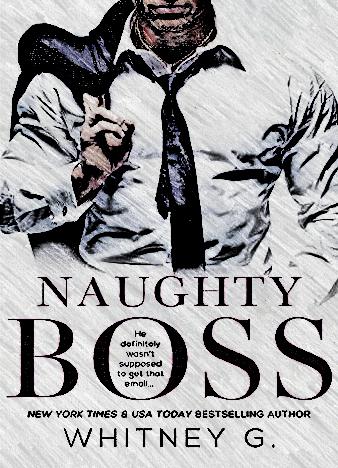 Whitney G, the author of numerous bestselling romantic novels, including the sexy and smutty Reasonable Doubt series, is back with a brand-new "blockbuster". Mya is a regular employee at a big company, and she's got some nasty things to say about her boss. On one side, she kinda hates him for always being mean and strict with her.

But on the other one, she feels a strong sexual connection, a mind-blowing affection that she can't get herself to shake off. Hey, that's only half of it: she accidentally sends a hate-mail to him instead of her girlfriend...She complains about him in every possible way: calls him an arrogant moron, a jerk, and a narcissistic bastard and hates the fact that she has to pick up all kinds of stuff for him without even a "Thank You".

Furthermore, she also writes that she's planning to quit his stupid company in two months and that she's practically counting the days when she can finally tell him to kiss her ass. So, the big boss reads the letter and immediately responds to the shocked girl. And, just when she finishes reading it, he opens the door and walks in. His name is Michael, and, even though she still thinks that he's a cocky prick, she wants him like crazy.

Obviously, she's confused and guilty; however, despite the fact that she thinks he'll fire her that same instance, he decides to pick a different approach. All her dirty fantasies about her boss are about to come true, and she'll get the proper punishment - the spanking she truly deserves. Naughty Boss invites the readers into a hot, sexy, hilarious world of Mya and Michael, two people who are drawn to each other but are too proud to admit that to themselves (or each other).

Sultan Mangogul of Congo is bored with life at court and suspects his mistress M...

Richard Paul Evans's brand-new installment in the bestselling and award-winning...

Diamond Johnson, the author of several bestselling books about strong-willed, in...