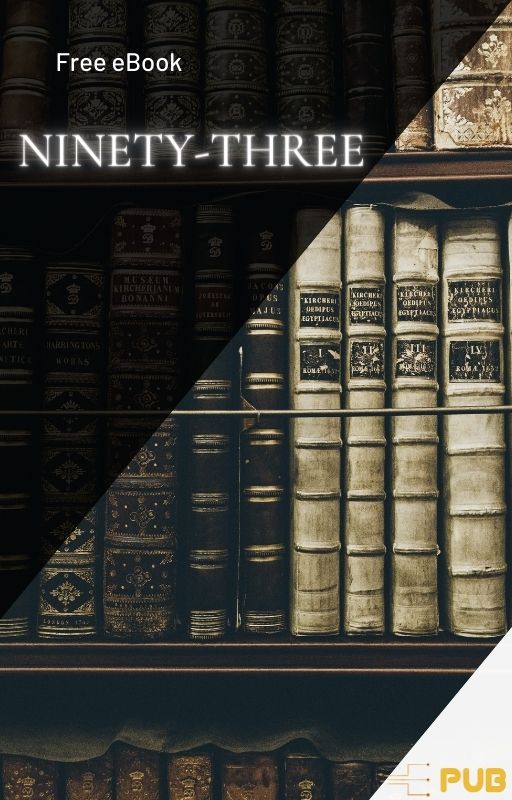 The year is 1793. In Brittany during the Royalist insurrection of the Chouannerie, a troop of "Blues" (soldiers of the French Republic) encounter in the bocage Michelle Fléchard, a peasant woman, and her three young children, who are fleeing from the conflict. She explains that her husband and parents have been killed in the peasant revolt that started the insurrection. The troop's commander, Sergeant Radoub, convinces them to look after the family. Meanwhile, at sea, a group of Royalist "Whites" are planning to land the Marquis de Lantenac, a Breton aristocrat whose leadership could transform the fortunes of the rebellion. While at sea, a sailor fails to properly secure his cannon, which rolls out of control and damages the ship. The sailor risks his life to secure the cannon and save their ship. Lantenac awards the man a medal for his bravery and then executes him (without trial) for failing in his duty.[2] Their corvette is spotted by ships of the Republic. Lantenac slips away in a boat with one supporter, Halmalo, the brother of the executed sailor, and the corvette distracts the Republican ships by provoking a battle the damaged ship cannot win. The corvette is destroyed, but Lantenac lands safely in Brittany and sends Halmalo ahead as a messenger. Lantenac is hunted by the Blues, but is protected by a local beggar, to whom he gave alms in the past. He meets up with his supporters, and they immediately launch an attack on the Blues. Part of the troop with the family is captured. Lantenac orders them all to be shot, including Michelle. He takes the children with him as hostages. The beggar finds the bodies, and discovers that Michelle is still alive. He nurses her back to health. Lantenac's ruthless methods have turned the revolt into a major threat to the Republic. In Paris, Danton, Robespierre and Marat argue about the threat, while also sniping at each other. They promulgate a decree that all rebels and anyone who helps them will be executed. Cimourdain, a committed revolutionary and former priest, is deputed to carry out their orders in Brittany. He is also told to keep an eye on Gauvain, the commander of the Republican troops there, who is related to Lantenac and thought to be too lenient to rebels. Unknown to the revolutionary leaders, Cimourdain was Gauvain's childhood tutor, and thinks of him as a son. Lantenac has taken control of Dol-de-Bretagne, in order to secure a landing place for British troops to be sent to support the Royalists. Gauvain launches a surprise attack and uses deception to dislodge and disperse them. Forced to retreat, Lantenac is constantly kept from the coast by Gauvain. With British troops unavailable his supporters melt away. Eventually he and a last few fanatical followers are trapped in his castle. Meanwhile, Michelle has recovered and goes in search of her children. She wanders aimlessly, but eventually hears that they are being held hostage in Lantenac's castle. At the castle Sergeant Radoub, fighting with the besiegers, spots the children. He persuades Gauvain to let him lead an assault. He manages to break through the defences and kill several rebels, but with Halmalo's aid, Lantenac and a few survivors escape through a secret passage after setting fire to the building. As the fire takes hold, Michelle arrives, and sees that her children are trapped. Her hysterical cries of despair are heard by Lantenac. Struck with guilt, he returns through the passage to the castle and rescues the children, helped by Radoub. He then gives himself up. Gauvain knows that Cimourdain will guillotine Lantenac after a show trial. He visits him in prison, where Lantenac expresses his uncompromising conservative vision of society ordered by hierarchy, deference and duty. Gauvain insists that humane values transcend tradition. To prove it, he allows Lantenac to escape and then gives himself up to the tribunal that was convened to try him. Gauvain's forgiveness after Lantenac's courageous act contrasts with Lantenac's executing the sailor at the beginning of the novel. Gauvain is then tried for treason. The tribunal comprises Cimourdain, Radoub and Gauvain's deputy, Guéchamp. Radoub votes to acquit, but the others vote to condemn Gauvain to be executed, with Cimourdain casting the deciding vote. Visited by Cimourdain in prison, Gauvain outlines his own vision of a future society with minimal government, no taxes, technological progress and sexual equality. The following morning he is executed by guillotine. At the same moment, Cimourdain shoots himself.

Celia, the main character of Christmas Roses, a certified bestseller by Amanda C...

Pyotr Andreyich Grinyov (the narrative is conducted on his behalf) is the only s...

London in the late forties: The spirited young writer Juliet receives an amazing...