ONE HOT DADDY: A SINGLE DAD NEXT DOOR ROMANCE 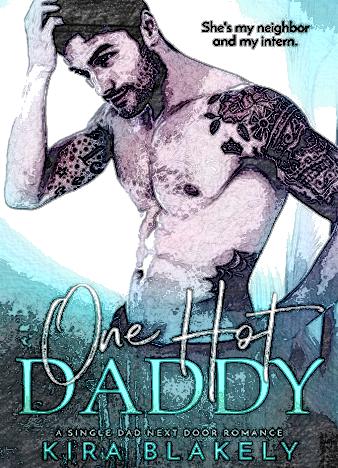 ONE HOT DADDY: A SINGLE DAD NEXT DOOR ROMANCE by KIRA BLAKELY

All Quentin can think about is pushing the girl against the wall and showing her what it means to be with a real man. But there's one tiny problem with that wonderful plan: Charlotte is an intern at his company, and they've got strict rules about messing around with the employees. He's a single father, so, the last thing the guy needs right now is a scandal.

And that is why he's doing everything in his power not to think about her, but it proves to be harder than he could ever imagine. However, that's not even the half of it: Quentin thought that he would be "safe" from her at home, but, when he meets her in the elevator of the building where he lives, he instantly realizes that there's no hiding from her now!

So now it's simply impossible for him to stay away from Charlotte, as she looks like the sexiest woman in that serious suit, and that smile makes him go crazy (and hard) in a matter of seconds. Yes, it's wrong to have any kind of a relationship with a person that works with and/or for you, but why would he ever go ahead and introduce the no-fraternizing policy that's blocking every desire in his body?

The Joe Dillard Series has been conquering the hearts and minds of countless rea...

What are the odds or a girl meeting not one royal prince, but two, and both of t...