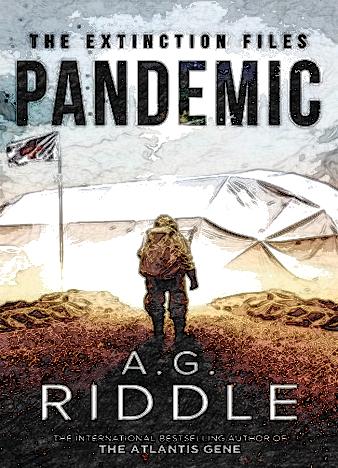 PANDEMIC (THE EXTINCTION FILES BOOK 1) by A. G. RIDDLE

A US Coast Guard vessel comes across a sub right at the bottom of the Arctic Ocean, just a few miles north of Alaska. The weird thing about it - it doesn’t have any national ID and is no match for any vessel known to the American Army. A team of scientists dives into the submarine and finds brick-strong evidence of some mysterious experiments that are destined to change everything we know about ourselves.

At the same time, in Kenya, two American citizens have been infected with a disease that looks a lot like Ebola. One of them is about to pass away, and the clock is working against Peyton as she tries to figure this strange pathogen out. She arrives at a remote African village only to be terrified by what happened there. And, as she digs deeper and deeper into the origin of this pathogen, she starts to realize that this outbreak is just the tip of the iceberg and something horrendous is about to happen.

There's a huge conspiracy that's about to take over the whole world. Desmond, a regular man, wakes up in a hotel in Berlin with no recollection of how he got there in the first place or who the hell he is. Then, he finds a dead guard on the floor! Obviously, he's being set up, and his only clue is a woman named Peyton. She seems to recognize him but doesn't want to tell him the whole truth - not yet.

The cops are hunting him out on the streets, and Desmond is trying to escape the law while putting his own life back together. Soon, he realizes that he had something to do with the horrifying outbreak. Furthermore, it turns out that he's got the key to unlocking the secret behind its origin. Pandemic is an exceptional mystery thriller with a brilliant plot, a fast-paced, action-packed narrative and an awesome cast of characters.

Logan used to be a prince (technically, he still is), but now every single perso...

1883. Thaniel Steepleton returns home to his tiny London apartment to find a gol...

The Argeneau Novel series has a very special place in the hearts and minds of th...