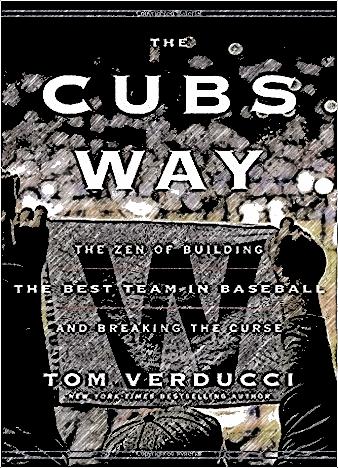 THE CUBS WAY by TOM VERDUCCI

Do you know who Mr. Tom Verducci is? He's one of the greatest Sports analysts on Fox and a renowned Sports Illustrated member, which means he's got more insight into the world of baseball than any other journalist out there. But this is not a story about a big win on the courts or a certain player's life journey.

No, in this book, the author tells us the truth behind Epstein's and Maddon's brilliant work with the Cubs - how they built the team from the ground up, became its leaders and turned them into World Series champs. If you're a fan of the game and want to learn about the great men that stand behind every victory and every business move in this particular team, The Cubs Way will be a good pick for you. The thing is - the Cubs haven't been the champs for 108 (!) years, so you can see now why these gentlemen are considered to be modern-day magicians.

Alright, how did a shabby team with no famous players and/or solid organization manage to beat all the other opponents and climb to the pedestal? The vets were too old to play, while the youngsters were too inexperienced to win a trophy that big. Epstein, the president of the team, and Maddon, the manager, were more than happy to share this fascinating story with the author.

Going from an underdog to the best team in the whole entire world can't be easy, and it's safe to say that if you're looking for an inspiration and a good kick up your you butt, The Cubs Way is just the right book to get hyped up from. "Dire straits" doesn't even begin to describe the state of things with the team, but, nevertheless, they did make it happen! And if you happen to be a fan of the Cubs, you’ll be even more excited to go behind the scenes and see what it took the team be great again.

They call Phoebe Robinson the new voice of the new generation, the writer that s...