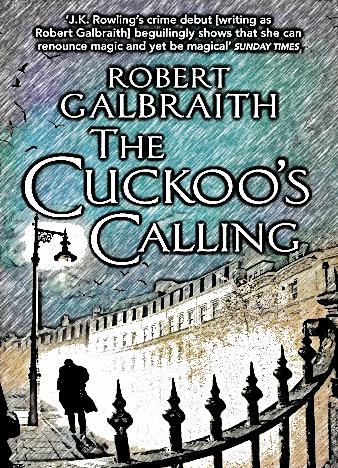 The Cuckoo's Calling by Joan Rowling

The Cuckoo's Calling is the 1st book in a brand-new series by Joan Rowling, the author of the legendary Harry Potter series. It has nothing to do with the world-famous series about the young wizard and is written in the genre of crime fiction. The book first saw the light of day in 2013 and was followed by sequels in 2014 and 2015 respectively. Just like with Fantastic Beasts and Where to Find Them, Rowling decided to write under a fictional name - Robert Galbraith.

Cormoran Strike, the main character of The Cuckoo's Calling, is a private investigator who lost part of his leg in Afghanistan and is now broke. He's the bastard son of a celebrity - a rock star - who's coming after the loan that he gave to Cormoran when he was opening his own office. Right about the same time, Strike is offered a job - to investigate a supposed suicide by a supermodel. The investigator is hired by the girl's adoptive brother, and the money is good, but Strike doesn't really believe that it was anything more than just a depressed model taking her own life.

The case was thoroughly investigated by the police, and he's not very optimistic about finding some new clues. Still, he takes the money and tries to figure it all out. He meets and interviews Lula's uncle, friends, bodyguard, and everybody else close to her. After he's finished talking to all the people that might now something about the case, he realizes that there's a lot more to the girl's death than he had initially thought.

Soon, Strike founds out that the supermodel was killed for her money - she had 10 million pounds - but the cops refuse to take that fact into consideration. Next, the investigator starts to suspect that her adoptive brother, the man who hired him, is the real killer. Or wasn't he? The Cuckoo's Calling is a pretty great novel that's both rewardingly complex and twisted - just enough to grab a regular reader's attention and keep him/her satisfied.

The Jungle
The Jungle by Upton Sinclair

For about a century, the first form of Upton Sinclair's exemplary novel has rema...

Angels & Demons careens from enlightening epiphanies to dark truths as...