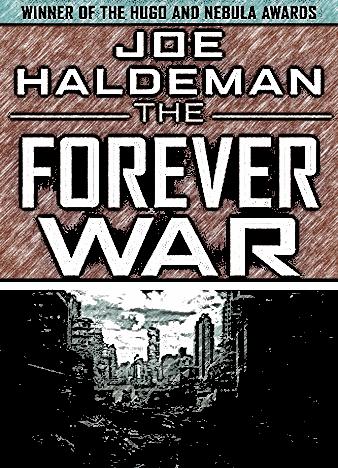 THE FOREVER WAR by JOE HALDEMAN

Joe Haldeman, the recipient of several prestigious international awards, created a science fiction masterpiece, one of the greatest books in the genre to ever be published. Welcome to the nearest future, dear readers, a brand-new universe with mankind conquering new worlds and taking to the stars. The soldiers are fighting the brutal wars and go back to Earth completely changed and alienated. The forever war has been going on for ages, and nobody knows if it's ever going to stop.

William, a physics student, is a part of an elite unit that specializes in hitting the enemy where it hurts. They're fighting for Earth's survival light years away, confronting an alien species. He's been killing the aliens for two years in a row, but, "thanks" to light-speed travels, it's been decades on Earth, not 2 years, and now it's like a foreign place for him, nothing like the place that he once called his home.

The Forever War is partially based on Haldeman's experience during the Vietnam War, and that's why it's so realistic and insightful. As a matter of fact, the critics are calling it one of the best military/science fiction novels in history, depicting the alienation that the brave men and women have to deal with even today when they return home from the battlefield.

As far as war stories go, this book is right there on top of the pedestal, so, if you're a fan of the genre, you simply have to read it! Joe Haldeman delivered a gripping, thrilling and revealing science fiction story that has a lot in common with the modern-day world and warfare. It's action-packed, suspenseful, and simply un-put-down-able.

The October Daye series is an international bestseller and has a very strong, lo...

Kelly Link has been praised by Neil Gaiman as "our national treasure". Some crit...