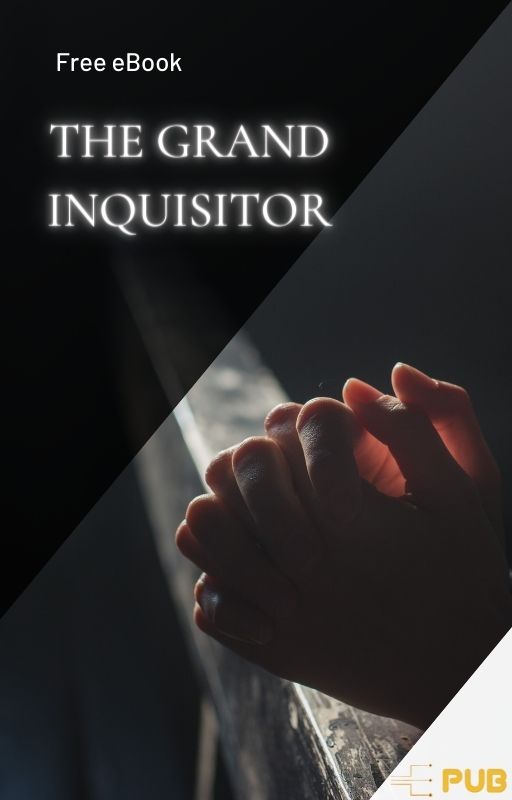 The Grand Inquisitor by Fyodor Dostoyevsky

The tale is told by Ivan with brief interruptive questions by Alyosha. In the tale, Christ comes back to Earth in Seville at the time of the Inquisition. He performs a number of miracles (echoing miracles from the Gospels). The people recognize him and adore him at the Seville Cathedral, but he is arrested by Inquisition leaders and sentenced to be burnt to death the next day. The Grand Inquisitor visits him in his cell to tell him that the Church no longer needs him. The main portion of the text is devoted to the Inquisitor explaining to Jesus why his return would interfere with the mission of the Church. The Inquisitor founds his denunciation of Jesus on the three questions that Satan asked Jesus during the temptation of Christ in the desert. These three are the temptation to turn stones into bread, the temptation to cast Himself from the Temple and be saved by the angels, and the temptation to rule over all the kingdoms of the world. The Inquisitor states that Jesus rejected these three temptations in favor of freedom, but the Inquisitor thinks that Jesus has misjudged human nature. He does not believe that the vast majority of humanity can handle the freedom that Jesus has given to them. The Inquisitor thus implies that Jesus, in giving humans freedom to choose, has excluded the majority of humanity from redemption and doomed it to suffer. Despite declaring the Inquisitor to be a nonbeliever, Ivan also has the Inquisitor saying that the Catholic Church follows "the wise spirit, the dread spirit of death and destruction." He says: "We are not with Thee, but with him, and that is our secret! For centuries have we abandoned Thee to follow him." For he, through compulsion, provided the tools to end all human suffering and for humanity to unite under the banner of the Church. The multitude then is guided through the Church by the few who are strong enough to take on the burden of freedom. The Inquisitor says that under him, all mankind will live and die happily in ignorance. Though he leads them only to "death and destruction", they will be happy along the way. The Inquisitor will be a self-martyr, spending his life to keep choice from humanity. He states that "anyone who can appease a man's conscience can take his freedom away from him". The Inquisitor advances this argument by explaining why Christ was wrong to reject each temptation by Satan. Christ should have turned stones into bread, as men will always follow those who will feed their bellies—but the author's point is also that people follow him whom they see is capable of producing miracles. The Inquisitor recalls how Christ rejected this, saying "man cannot live on bread alone", and explains to Christ: "Feed men, and then ask of them virtue! That's what they'll write on the banner they'll raise against Thee and with which they will destroy Thy temple. Where Thy temple stood will rise a new building; the terrible tower of Babel will be built again, and though, like the one of old, it will not be finished". Casting himself down from the temple to be caught by angels would cement his godhood in the minds of people, who would follow him forever. Ruling over all the kingdoms of the Earth would ensure their salvation, the Grand Inquisitor claims. The segment ends when Christ, who has been silent throughout, kisses the Inquisitor on his "bloodless, aged lips" instead of answering him. On this, the Inquisitor releases Christ but tells him never to return. Christ, still silent, leaves into "the dark alleys of the city". Not only is the kiss ambiguous, but its effect on the Inquisitor is as well. Ivan concludes: "The kiss burns in his heart, but the old man adheres to his idea". Christ's kiss may also mirror an event that occurs earlier in the novel when the elder Zosima bows before Dmitri Karamazov. No one seems to understand why Zosima does this, and Fyodor Karamazov exclaims: "Was it symbolic of something, or what?". Not only does the parable function as a philosophical and religious work in its own right, but it also furthers the character development of the larger novel. The parable reveals Ivan's contempt for organized religion. After relating the tale, Ivan asks Alyosha if he "renounces" Ivan for his views. Alyosha responds by giving Ivan a soft kiss on the lips, to which the delighted Ivan replies: "That's plagiarism... Thank you, though". The brothers part soon afterward.

Are you looking for a smart, funny, thrilling book for your kids to enjoy? You j...

THE GREATEST FANTASY EPIC OF OUR TIME The dark, fearsome Ringwraiths are search...