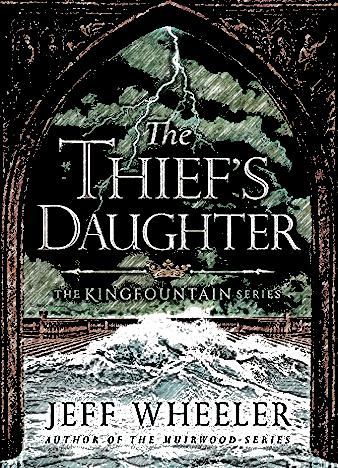 THE THIEF'S DAUGHTER (THE KINGFOUNTAIN SERIES BOOK 2) by JEFF WHEELER

Historical fantasy has always been one of the most popular genres in the United States and all over the world, simply because people love to forget about the reality every once in a while and dive into a whole another universe with magic, swords, and sorcerers. Currently, the Kingfountain Series includes 4 best-selling books by Mr. Jeff Wheeler, and this is the 2nd installment - some critics claim it's the man's best work to date.

Owen first arrived to the court of the menacing King as a young prisoner. Soon, he became close to the man by pretending to be a boy touched by the great Fountain. Almost a decade later, the once scared teenager has grown into a strong, confident man. Duke Horwath, a prominent figure in the kingdom, is mentoring him on politics and war.

Owen is in love with the old man's grandchild, his best friend from the childhood. Her name is Elysabeth, and together they wanna build a bright future not only for the King's lands but also for their children that are yet to be born. But, the king's intrigues threaten to destroy everything they hold dear. Someone is trying to take Severn's place on the thrown.

However, the king is ready to use Ely as bait to lure the intruder in, leaving Owen with a choice to make: stick with devotion or duty. It's time for Owen to make a series of devastating sacrifices in order to stay alive and protect those he loves. Spies are roaming the streets of the kingdom, and you can't really trust anyone. The Thief's Daughter is a thrilling romantic novel that mixes love, duty, devotion and faith in a breath-taking fantasy world.

What if you are trapped in a fairy tale book?When Kat accidentally rips apart an...

The fans of science fiction and fantasy know and love Naomi Novik for the best-s...

Countless centuries ago, they betrayed Illarion, a dragon, and turned him into a...