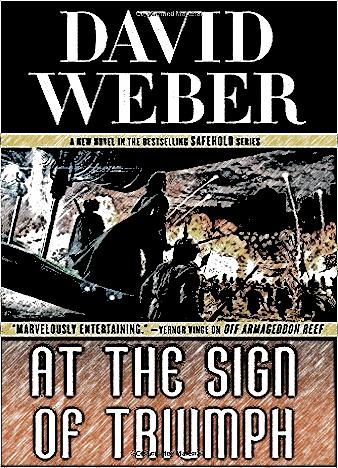 AT THE SIGN OF TRIUMPH (SAFEHOLD) by DAVID WEBER

Dear readers, please give a warm welcome to David Weber's brand-new bestseller, At the Sign of Triumph. This is the latest chapter in the award-winning Safehold series, and the fans have been waiting for this book ever since the last one came out. The Charis was a huge success, but the harsh reality is - it boasted only 2 percent of the total population, even less.

So, that means there's no way for it to avoid complete and utter devastation. And that's why the Church was more than confident that they would destroy the rebels in a single blow and send a warning message to those who oppose them. However, they could never understand that Charis had something far more important and powerful than ships and soldiers. It had a true king, a prince and a navy that was ready to give everything it's got in the final battle.

Furthermore, Charis had someone who knew the real truth about Safehold and what it stood for, someone who knew that The Church was nothing but a horrible lie. And finally, it had the last survivor of a long-gone planet - Earth. So, now, after 8 straight years of non-stop war, it's actually The Church that's about to be crushed, not Charis. At the same time, The Church has enormous resources at its disposal.

Plus, they're ready to use the forbidden tech that's powering Charis. The war is about to end, and there will be a clash of the titans. The soldiers are ready, the ships are armed and fueled, and only one of the sides can survive. Who's it gonna be? Those who want to ban freedom, to make people forget about it, or those who believe in it with all their hearts and will stop at nothing to protect it?