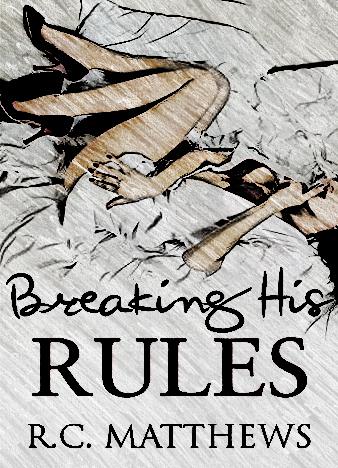 BREAKING HIS RULES by R.C. MATTHEWS

When Samantha got one of the best bartending jobs in the city, she was really proud of herself. And, there wasn't a long list of rules - only one: don't sleep around with the regular customers and/or the bosses. Well, that was not a problem for her, because money could never make her lose her head and start chasing after a wealthy man. She is a different kind of girl.

But, when she met Damon, everything changed. He owned a midnight club and his eyes were as blue as the ocean. It was pretty hard for Samantha to land the job, so, she wasn't going to risk it all for a fling that would lead to just a single night together. Still, it's kinda hard to obey that one rule, especially when she felt a strong connection with Damon, a man she just met.

At the same time, she was never good at following the rules and doing what she's told, so, even for one night with him, she was ready to put everything on the line - that's just the way she's "wired". Obviously, sex with him was amazing, and he wanted more than just a one-night stand. How could she say no to a man like that, right? Besides, he was her boss, and saying "No" to him was probably not the best idea in the world.

At Ever After High, an enchanting boarding school, the children of fairytale leg...

Can you love a child with a terrible disease? What would you do if your child wa...

Viktor, the main character of the story, has spent half-a-decade trying to destr...