DEATH'S END (REMEMBRANCE OF EARTH'S PAST) 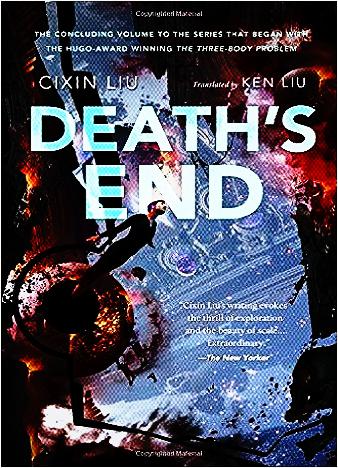 DEATH'S END (REMEMBRANCE OF EARTH'S PAST) by CIXIN LIU

Cixin Liu is, without a doubt, one of the greatest Chinese science fiction authors. He's got tons of national and international awards behind his back and most of his books instantly become bestsellers. And now, thanks to a team of professional translators, we can all enjoy the brilliant Remembrance of Earth's Past series. It's an epic trilogy, and, if you were lucky enough to read the first two novels, you'll be happy to learn that Death's End is the final chapter, the grand finale.

Cixin Liu did a fantastic job of delivering on all of his promises and wrote a monumental series for all of the fans of science fiction. The Doomsday Battle is now just a memory - it happened 5 decades ago - but the uneven balance of the Dark Forest Deterrence is the only thing that keeps the brutal invaders from laying waste.

At the same time, Earth is doing pretty great, partially thanks to the amazing Trisolaran technology that allowed for new, exciting projects to become a reality. And it's not only the humans who are adopting a foreign culture - the Trisolarans are slowly, but steadily learning our ways as well, and it seems like the two species are finally ready to leave the war behind and focus on ensuring that the universe will be a safe, peaceful place. Cheng Xin is an engineer from the 21st century. She's finally awake, and she will have to get used to this new, strange world.

She's a very important "asset" for mankind, as she knows a lot about a program that's long forgotten by the current generation. Now, Cheng Xin's knowledge might just be the spark to start a new war between the 2 worlds. So, what's in stores for humanity - prosperity or total annihilation? Grab a copy of Death's End and find out!

Mary Higgins Clark, one of the finest mystery thriller authors of our time, is b...