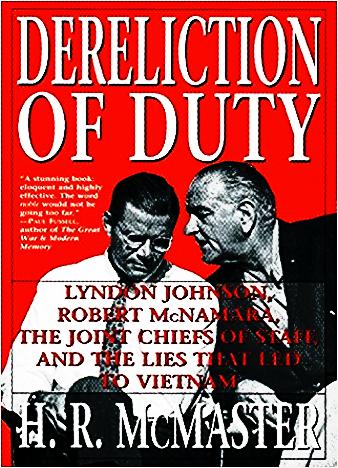 Do you know why the United States lost the war in Vietnam? Did the military folks fail? Or was it the mass media that couldn't support the cause? No, the war was lost because of the incompetent folks in Washington. That's what H. R. McMaster claims in this stunning new exploration of the 5-decades-old war that took the lives of millions of innocent folks. Why did America get itself into a devastating conflict with the country?

It's safe to say that Dereliction of Duty is the one and only book in the world that draws the complete picture of what really went down and who the key players were. It took the author a lot of effort and countless hours of research, but the final result is truly worth your while if you appreciate honest, revealing and thought-provoking documentary books.

Who made all those faulty decisions, who was involved in the highest ranks of the US government and how did the States end up in a hazardous quagmire? This book reveals the true motives behind each decision and crashes the previously published theories of countless other historians from all over the world. The only way to move forward and to flourish is to recognize the mistakes of the past.

Otherwise, this country will never truly recover and be able to spread its wings. Dereliction of Duty is a fast-paced, page-turning book that features President Johnson, General Taylor, Mr. Bundy and other government officials that managed to trick not only the Congress but also the regular American folks. The bottom line is - if you wanna learn the real truth behind America's involvement in the brutal war in Vietnam, check this book out

The book The History of the Peloponnesian War describes the war between the Delo...