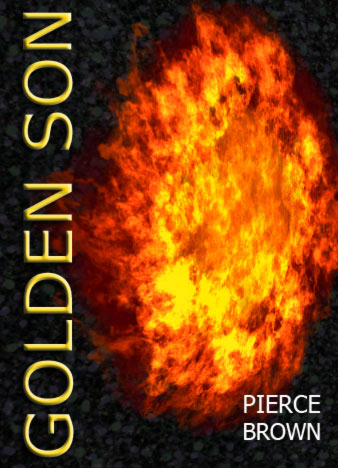 Pierce Brown's GOLDEN SON is the second installment in his "Red Rising Trilogy," a series of novels set in a dystopian future where a genetically-engineered elite is ruling the universe.

Brown's premise is that future humanity has been divided into color-coded castes, with the super-strong, super-beautiful "Golds" at the top of the hierarchy. Beneath them, the other Colors fill a variety of pre-ordained roles (including police, doctors, entertainers, scholars, and laborers), all in the service of the all-powerful Golds.

In the first installment of the series, RED RISING, 18-year-old Darrow, a common Red laborer from the mines of Mars, is recruited by a secret revolutionary group called the Sons of Ares to go undercover as a Gold in an attempt to destroy the Society from the inside. Darrow is physically and genetically altered by a "Carver" so that he can pass for a Gold, and he is accepted at one of their prestigious schools to begin training to become one of the elite Peerless Scared - the hope is that once he rises to the top of his class, he can be instrumental in tearing the system down. As GOLDEN SON begins, two years have passed since the events of RED RISING.

Darrow, now 20, has been accepted by ArchGovernor Augustus and is set to begin further training in the art of War at the Academy. He has heard nothing from the Sons of Ares, and is unsure of his role in the revolution - and even if the revolution still exists. The first few chapters of GOLDEN SON are very much like the second half of RED RISING - lots of wargames as Darrow continues his "studies" and attempts to one-up his ruthless competition. But once the novel really gets going, it evolves into an intense, devilishly-plotted political thriller that sheds a harsh light on the nature of humanity.

True Love: A Story of English Domestic Life by Sarah E. Farro is a much...