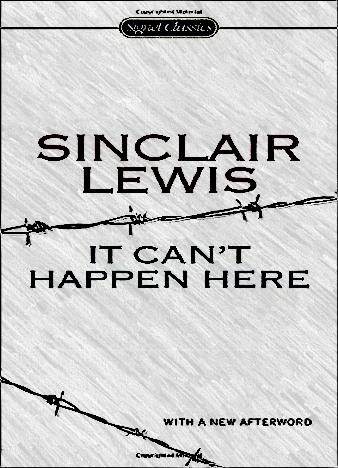 The critics are calling It Can't Happen Here one of the most important books to ever be published in America - yep, it's a pretty big one. And, as far as political classics go, Sinclair Lewis's masterpiece is the undisputed champ. You could call this novel a warning, a story about the fragility of the political structure of the US, the faults of democracy, and an alarming, engaging look at what this country could turn into if the people and the government failed to do what was necessary throughout history.

The book was written almost 100 years ago, back when the Great Depression was demolishing the very foundation of the American civilization, and folks didn't really pay attention to what Hitler was doing over in Europe.

This is a sharp, edgy and witty political satire that holds great value to the historians and is more relevant today than ever, given the fact that the country now has a vigorous, energetic and unpredictable POTUS. It Can't Happen Here is fresh, contemporary and not at all politically correct. If you appreciate thought-provoking, insightful and nation-shaping books, then you most definitely should grab a copy (hard or digital) of Sinclair Lewis's game-changer and dive into all the intricacies of modern-day politics.

This novel is a message to the vigilant and thinking Americans. It's prescient, moving and mandatory for the current generation of US folks. At the same time, it's worth mentioning that It Can't Happen Here isn't some documentary and/or boring book with countless numbers, graphics and suppositions - it's pretty damn gripping and riveting!

The Fire This Time is a powerful, emotional, brutally honest collection of short...