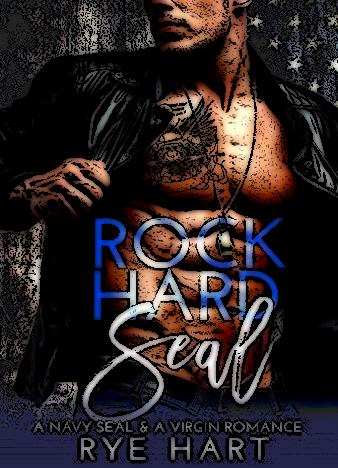 ROCK HARD SEAL: A NAVY SEAL & A VIRGIN ROMANCE by BY RYE HART

Harley, and ex-Navy SEAL, has a job to do: to protect the girl at all cost. Now, he's a pro, one of the best bodyguards out there, but he can't get her out of his head. The moment he saw Abigail, a lovely 22-year-old virgin, he knew he had to bend her over and deliver that sweet punishment. He'd been training in SF for years, but even the harsh environments couldn't fully prepare the man for this hussy.

They first laid eyes on each other when he came into her father's office, and that's when they both knew they just got themselves into all kinds of trouble. The girl is smart, witty, sassy and over-the-top sexy. As for her dad, he's a big-time attorney who has to deal with multiple threats on a daily basis. He's putting the worst people on planet Earth in jail, and that is why he needs Harley to be by her side 24/7.

Yes, he's paying the guy handsomely to protect Abigail from the outside world, but who's going to protect the minx from the alpha-male bodyguard? So, technically, she's his boss, and he is supposed to do whatever she tells him to. Well, he's not really used to being controlled, even though he is a soldier at heart. No, it's time for him to show who's the boss around here and to bend her over his knee.

She's off limits; she's that one and only forbidden fruit that Harley can't have. He can't allow himself to lose focus and to let his guard down, even for a second. But how can he stay away from this sizzling-hot young woman with a smart mouth and a gorgeous body that's begging for a rough-tough man like Harley to "handle" it? Rock Hard Seal is a full-length, standalone erotic novel with a big, bulky SEAL, a virgin hussy and a great chemistry between the two. The fine combination of thrill, passion, hot sex scenes and an amazing sense of humor turn this book into a must-have.