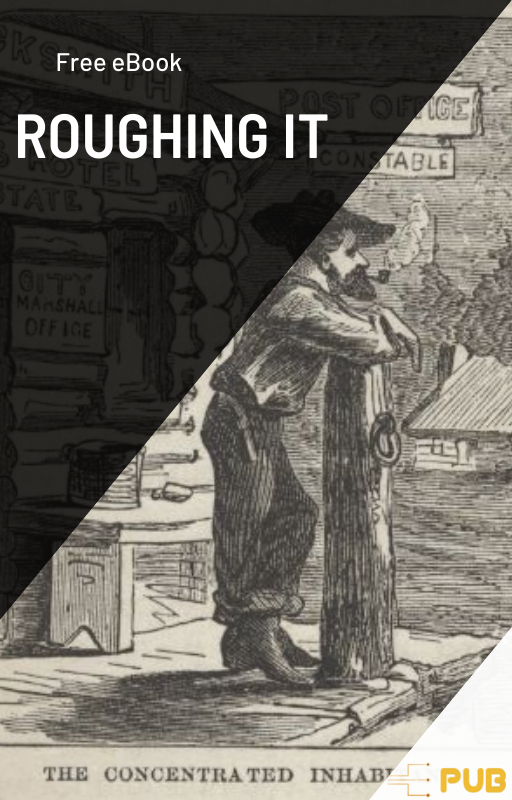 Roughing It by Mark Twain

Roughing It is a book of semi-autobiographical travel literature by Mark Twain. It was written in 1870–71 and published in 1872, as a prequel to his first travel book The Innocents Abroad (1869). Roughing It is dedicated to Twain's mining companion Calvin H. Higbie, later a civil engineer who died in 1914. The book follows the travels of young Mark Twain through the Wild West during the years 1861–1867. After a brief stint as a Confederate cavalry militiaman (not included in the account), he joined his brother Orion Clemens, who had been appointed Secretary of the Nevada Territory, on a stagecoach journey west. Twain consulted his brother's diary to refresh his memory and borrowed heavily from his active imagination for many stories in the book. Roughing It illustrates many of Twain's early adventures, including a visit to Salt Lake City, gold and silver prospecting, real-estate speculation, a journey to the Kingdom of Hawaii, and his beginnings as a writer. This memoir provides examples of Twain's rough-hewn humor, which would become a staple of his writing in such later books as Adventures of Huckleberry Finn (1884), The Adventures of Tom Sawyer (1876), and A Connecticut Yankee in King Arthur's Court (1889).

Roughing It recounts midway through the book that a rich "blind lead" gold strike was discovered and claimed by a partnership of Twain, Calvin Higbie, and a mine foreman A.D. Allen, giving them well-founded hopes of being millionaires. To establish a claim, it was required that any or all of the claimants do a reasonable amount of work on the claimed strike within ten days. Due to chance happenings and failed communications between the three, the work requirement was left unfulfilled, and the forfeited but rich claim was quickly seized by others ten days after it was discovered. In the dedication of the book, Twain refers to Higbie as an "Honest Man, a Genial Comrade, and a Steadfast Friend … dedicated in Memory of the Curious Time When We Two Were Millionaires for Ten Days".[7] The prospecting story is also covered in a 1968 episode of the syndicated television anthology series Death Valley Days, hosted by Robert Taylor. In the television dramatization, Tom Skerritt plays Twain, and Dabney Coleman was cast as Higbie.

Whitney G, the author of numerous bestselling romantic novels, including the sex...

Welcome to 2061, ladies and gentlemen, where a gifted young savant creates a wor...

Heretics is a collection of 20 essays originally published by G. K. Chesterton i...