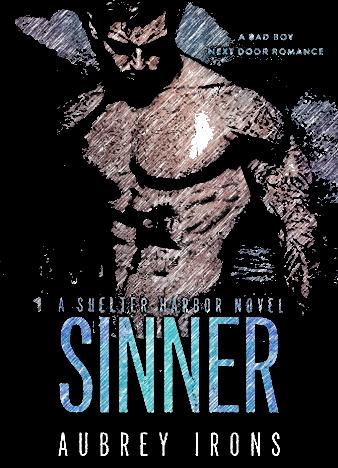 SINNER: A BAD BOY NEXT DOOR ROMANCE by AUBREY IRONS

Eva is the sweetest temptation for Rowan, his perfect angel that he wants to make his woman. She's the daughter of a preacher, and everything about her is graceful, honest and God-fearing. She's the kind of girl that saves herself for that one and only man that will become her husband. Yes, Eva is an innocent young lady with no experience in the outside world, so to speak - she's too pure for a man like Rowan.

He's got a plan, though: he wants to make her a part of his world, to mix that purity with lust and to turn her from a modest girl into a sex addict. Yep, she's going to beg him for more of that apple in the garden. The only problem is Eva is in town only for a few short weeks, and they say her old man has already promised her to a fella the girl has never even seen before.

The family is living down the street, a few minutes away from Rowan's bar. So, it's kinda hard for him to think about anything else and to resist the urge to go over there and make her his. Will there be consequences to his actions? Of course, there will be - Terrible ones! But he doesn't care about that anymore. It doesn't matter that she's promised to another guy or that she's off-limits.

He knows exactly what he wants from her, and now it's time for him to get it. Eva knows all too well that she needs to stay as far away from men like Rowan as possible, but she's been living the life of a pure dame for far too long. Maybe it's time for her to grow up and live a little? Sinner is a steaming hot, sexy and naughty romantic novel that's destined to become a bestseller. In fact, it already is an international hit! Don’t miss out on an epic love story that will turn you on in a jiffy!

Cohen's name is well-known in the billionaire&nbsp...

Vince Flynn, the author of the insanely popular and loved mystery thriller serie...