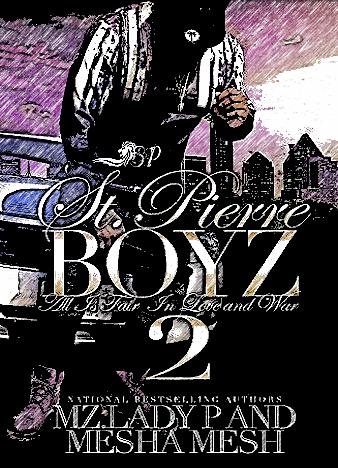 Mz. Lady P is one of the most successful and respected authors in urban romance, and she always comes through with gripping, sexy and fun books. The first St. Pierre Boyz novel created a lot of international buzz and now the series is back for more. The women of the story had more than enough of St. Pierre, and now they're wilding out.

Leilani is going through a rough patch: the dirty secrets of the past are all out, and she's struggling with her own emotions, trying to figure out whether Luxe was telling her the truth about his feelings or if it was all a big lie just to get to her ex-man. Meanwhile, Dynasty feels abandoned and betrayed by Bastian, and she won't even speak to him unless he proves to her that his is actually the right fella for her.

Diamond's plate is also full: Judah is acting like a 5-year-old child, but he'll soon learn that she's not the woman to be messed with. He won't get away with it, that's for sure. She has turned from a nice girl into a pretty "scary" dame, and Diamond herself has no idea how to get back to her old self. Yes, when it comes to the hood and putting the streetz on lock, the St. Pierre brothers perform handsomely.

But now when Ava is not a part of the team anymore, the heat is stronger than ever, and it's time for the boys to show them fools that they're still runnin' the city. It's actually quite simple on the streets: either you take the shot first and prevail, or you get popped and step aside. However, when it comes to their ladies, they simply don't know how to act...St. Pierre Boyz 2 is a near-perfect urban romance with just the ideal plot and characters to keep you entertained throughout.

Every so often a love story so captures our hearts that it becomes more than a s...

Connor, the main character of Cuffed, a riveting and naughty new bestseller from...

Currently, Jojo Moyes is one of the most popular writers in the whole wide world...