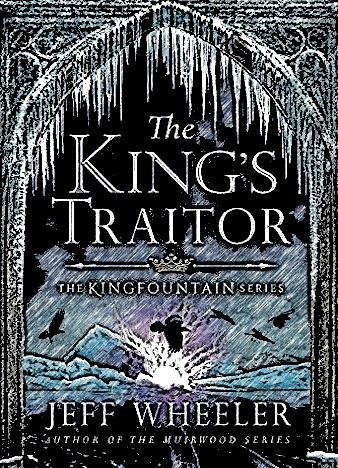 THE KING'S TRAITOR (THE KINGFOUNTAIN SERIES BOOK 3) by JEFF WHEELER

Jeff Wheeler is a prominent figure in modern-day fantasy literature and his Kingfountain Series constantly tops all kinds of international sales charts. The King's Traitor is the 3rd book in the franchise and follows Owen's rise to power. He used to be a scared little boy who was condemned to be a prisoner for life. However, against all odds, he overcame all the struggles and became a confident, gifted, trustworthy young man.

The King himself made him an officer and gave him access to all kinds of secrets. Over the years, Severn, the mighty king, has turned into a ruthless, brutal man, and Owen is patiently waiting for someone to topple the mad ruler. He separated him from his protector, his mentor and the girl he truly loved, so, even though the young man is serving the king and obeying his will, he knows that one day, someone will bring him down.

He also knows that Severn is planning an upcoming onslaught, and that gives him the perfect opportunity to strike where it really hurts. But, as it soon turns out, the king wants Owen to lead the army into battle, which makes it harder for him to focus on what he's been dreaming about ever since his imprisonment. Right now, his orders are clear: start a war with the neighboring kingdom.

However, when he meets their fascinating leader whose magic tops that of Owen, he decides to confide in her and make her an ally. So, they put their forces together and attack the corrupt king with everything they've got. Will they be able to overthrow the bloody ruler, or is it already too late? The King's Traitor is a triple-A fantasy novel, an epic historical romance that will grab the readers with all kinds of unexpected twists, turns, a strong cast of characters and quite an exciting plot.

If you love A Court of Thorns and Roses, then you'll most definitely fall in lov...