WHAT SHE KNEW: A NOVEL 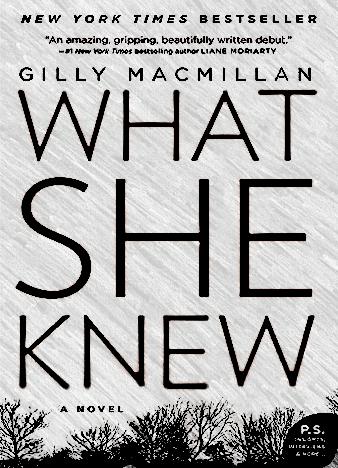 WHAT SHE KNEW: A NOVEL by GILLY MACMILLAN

Gilly Macmillan's breath-taking debut is both chilling and enthralling. This is a 100% page-turner, a riveting mystery/psychological thriller that is a proper match for the genre's "kings" like The Girl on the Train. Rachel, the main character of the story, is just enjoying a nice walk in the park with her 8-year-old son. The boy asks her if he can run a bit ahead and feel the wind in his face.

He's just acting like any other kid out there, but when he suddenly disappears into thin air, Rachel is desperate. The police immediately start a search party, and pretty much the whole law enforcement unit is out there looking for the boy, but Rachel can't forgive herself for being careless. She divorced recently and losing her only son crushed every hope she had of starting a happy new life with him.

Days pass, and there’s still no sign of the kid. So, the police call every last person that knew him into questioning, including the girl's ex-husband who's got a new wife now. The mass media turns Rachel's tragedy into a TV show, and their attitude changes quickly: at first, they were all sympathizing her, but now they're claiming that she had something to do with Ben's disappearance.

She can't take it anymore, and the cops aren't doing anything, so, Rachel takes matters into her own hands and tries to puzzle it all together. Soon, she realizes that nothing's as it seems and that somebody close to her, somebody from her family had a big role in Ben's abduction. Where is the boy now? Is he doing alright? The clock is ticking, and every passing second is precious...

There were twelve criminals who were waiting for the death penalty. But one day...

This novel is hard and tender at once. It is about unusual ways to release us fr...